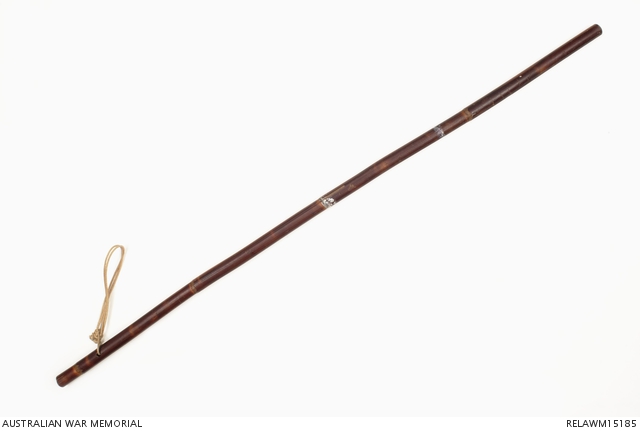 Length of brown bamboo cane with a hole drilled 8 cm from the top. A double loop of white twine forming a wrist strap has been knotted through this hole.

On the orders of Colonel William Holmes, this cane was used to flog four German civilians in New Guinea in retribution for their attack on a British Methodist missionary, the Reverend William Henry Cox. The Germans, who suspected Reverend Cox of being a British spy, thrashed him with a stick on 26 October 1914, after he passed through the township of Namatanai (on New Ireland) on his way to the nearby mission station.

In response, Colonel Holmes, commanding the Australian Naval and Military Expeditionary Force, (ANMEF) and Administrator of German New Guinea, demanded that a 'short, sharp and exemplary punishment should be meted out to those concerned.' Accordingly, on 30 November 1914, in Proclamation Square, Rabaul, the four Germans concerned were brought before the assembled Australian troops and beaten with the cane to give them 'a taste of the same medicine they administered to the Reverend Mr. Cox.' This controversial (and probably illegal) act, which was carried out without trial, led to demands from the German government that Colonel Holmes himself be charged.

The Australian government chose not to take any action in the matter, and promoted Holmes to command the 5th Infantry Brigade and then later as major general, the 4th Australian Division. He was mortally wounded by shellfire at Messines on 2 July 1917, and is buried at Trois Arbres Cemetery, near Steenwerck in northern France.