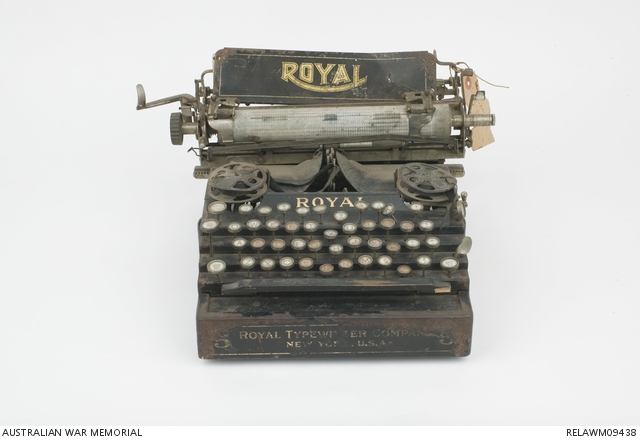 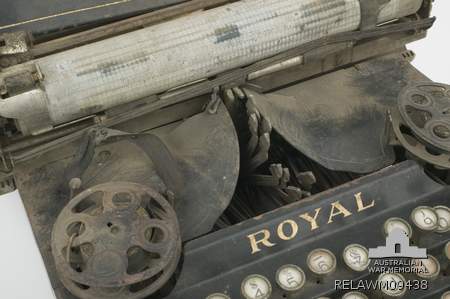 The Royal Standard No. 5 Typewriter is a flat bed design with 4 rows of keys. The space bar is made of wood and has a wear mark where the right thumb of the users would have struck it. The ribbon reels above the keys are both damaged and the ribbon is frayed. The vulcanised rubber roller of the typewriter shows evidence of many hours of use and there are some words that are still legible on the roller. 4 rubber stoppers are attached to the bottom of the typewriter to keep it stable during use. The typewriter originally would have had a leather case for transport, but this is no longer present. The typewriter's serial number is '124214- 5'.

Holmes was the initial owner of the typewriter, purchasing it for his personal use before the outbreak of the First World War. When he was appointed to raise and command the Australian Naval and Military Expeditionary Force (ANMEF) in August 1914, he took the typewriter for use in administrative tasks.

The typewriter was used throughout Holmes' tenure as the officer in charge of the Rabaul garrison and was taken with him when the initial force returned to Sydney in early 1915. Holmes then took his typewriter to his next command, which was 5 Brigade, AIF then being formed at Liverpool Camp, Sydney. Wisdom at this time had been appointed brigade major for 5 Brigade. The typewriter travelled from Australia to Egypt with Wisdom, where it was again put to work in the Brigade Headquarters office. The typewriter continued to be used by 5 Brigade HQ on Gallipoli and after the evacuation it was taken back to Egypt.

Wisdom took command of 18 Battalion in February 1916 and when his battalion moved to Ismailia the type writer was taken as well. According to Wisdom, the donkey that carried the typewriter, and many other items, on its back was the smallest he had ever seen. The typewriter was taken to France with 18 Battalion and was used by the headquarters staff into 1916, when it was replaced by a newer typewriter. However, Wisdom kept this typewriter as Brigadier General Holmes had given it to him as a souvenir. Holmes himself died of shell wounds in 1917.

Following the end of the First World War, Wisdom remained in England with the Repatriation and Demobilization Department of the AIF, where once again, he used the typewriter to assist him in his administrative duties. He returned to Australia at the end of 1919 and successfully applied for the position of Administrator of the Mandated Territory Of New Guinea.

He took up his post in March 1921 and he brought the typewriter with him, returning it to the place where its military service had begun in 1914. He remained in Rabaul until late 1931, when his wife became ill. They returned to Australia where his wife passed away in November of that year. He returned briefly to Rabaul, but only remained there until June 1932. He retired in 1933 and alternated his time between Melbourne and Perth, where he had some mining interests. Wisdom died in Melbourne in December 1945.