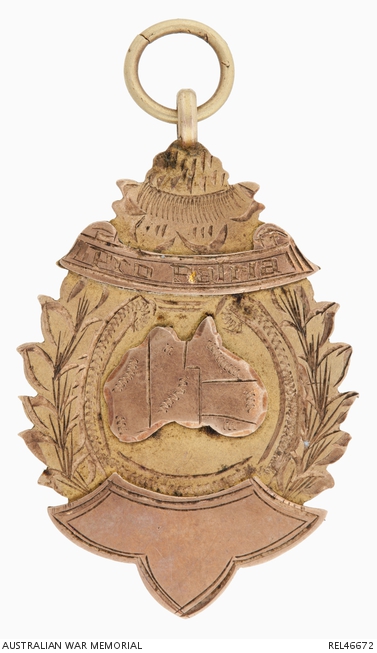 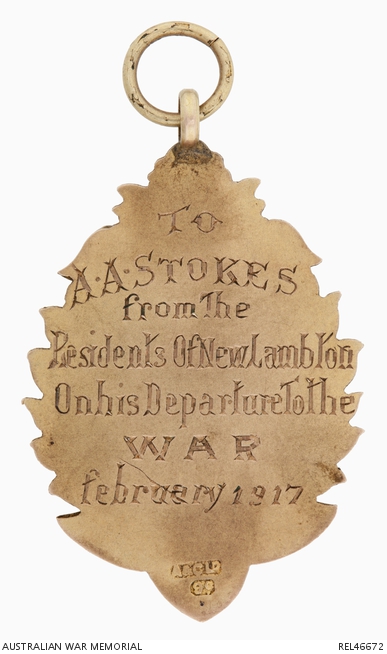 9 carat gold watch fob presented to Private Archibald Allan Stokes on his departure from Australia for the First World War.
Obverse features a central map of the Australian mainland, surrounded by a laurel wreath and surmounted with a rose gold scroll bearing the words 'Pro Patria'.
Reverse is engraved with the inscription 'To A.A. STOKES from the Residents of New Lambton On his Depature to the WAR February 1917'.
Stamped below this is, 'A&C LD and '9C'

This 9 carat gold farewell fob pendant was presented to Archibald Allan Stokes on the evening of 5 March 1917 by the Soldier's Send-Off and Welcome Home Committee of New Lambton, NSW. Held at the local Mechanic's Institute, the evening also farewelled recent enlistees, Privates Heath, Nicholson and McKenzie. Each man was presented with these engraved watch fobs by Mrs Barrett, who represented the Committee. The "Newcastle Morning Herald and Miner's Advocate" (Wednesday 7 March 1917, p 3) noted that Private Heath thanked the committee and stated "that they intended to keep up the good name won by those who had gone before them", adding that he hoped "it would be unnecessary in the near future for such functions as this to be held." The remainder of the evening was devoted to a concert featuring vocal solos, comic songs, recitations and hornpipe dancing.

Arnold Stokes had enlisted on 20 January 1917, just a month before his 24th birthday and would soon embark for Egypt from Melbourne aboard the transport 'Boorara', which arrived at Suez on 20 June. Under service number 2967 he was assigned to 4th (ANZAC) Battalion, Imperial Camel Corps (ICC) on 23 August as a trooper.

Stokes joined the ICC soon after its involvement in the Second Battle of Gaza on 19 April 1917, in which the unit suffered high casualties. Later in the year, they were active in the operations to destroy the Turkish defensive line between Gaza and Beersheba. As the Camel Corps moved into the fertile country of northern Palestine, their utility declined and, in June 1918, the unit was disbanded.

Shortly before this on 18 May Stokes contracted malaria. He appeared to recover but re-entered hospital at Port Said on 24 July 1918 and died of pneumonia there on 20 August.

On 19 December 1918, once again in the New Lambton Mechanics Institute Hall, a far more sombre ceremony was held for the men of the town who had not returned from the war, it being noted that of the 110 men who enlisted from the town, 19 had not returned. Certificates from the town council were presented to relatives of the fallen men. Private Stokes is mentioned in the report of this event, so presumably his wife, Mary, was present to accept the certificate.