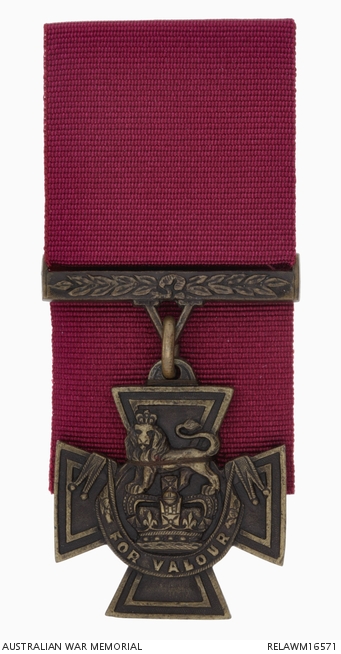 Edward John Francis ‘Jack’ Ryan was born to Michael and Eugenia (nee Newman) Ryan at Tumut on 9 February 1890. Working as a labourer at the outbreak of the First World War, Ryan and enlisted in the AIF at Wagga Wagga in December 1915 and joined the ‘Kangaroo march’. The march, from Wagga Wagga to Sydney, was the longest in a series of recruitment drives designed to bolster flagging enlistment rates in the latter months of 1915. Ryan was posted as a private to 55 Battalion, with the service number 1717. He embarked on 14 April 1916 and, following training in Egypt, joined his unit in France on 23 September.

Though not always an adherent to military discipline, Ryan’s actions during the battalion’s assault on the Hindenburg defences in late September 1918 were inspirational. During late September the 14th Brigade of the 5th Division was tasked with pushing through the outer defences of the Hindenburg Line near Bellicourt to expose the Beaurevoir Line, the Hindenburg’s last barrier.

At 6am on 30 September, 14 Brigade, including 55 Battalion, launched their attack. An ineffectual allied barrage prior to their assault had left many of the German machine gun emplacements and artillery undamaged. Soon the intense German fire forced the Australians into the Le Catelet trench system near Cabaret Wood. Just after noon, the Germans launched a determined counter attack to drive the Australians from the trench.

The Germans gained ground, capturing a trench just north of Ryan’s position. Ryan immediately led a detachment against the enemy troops forcing them back and retaking the trench. The Germans counter-attacked and managed to place a bombing party at the rear of Ryan’s position. Appreciating their critical situation, Ryan again led his party against the enemy bombers. Ryan’s party was down to only three members by the time they reached the Germans and using bayonets they managed to account for three Germans soldiers. Moving on alone, Ryan continued to harass the German troops with bombs, forcing them to retire across no man’s land. During this last action, Ryan was wounded and evacuated from the line. For his actions he was awarded the Victoria Cross. The recommendation for the award reads:

‘For conspicuous gallantry and devotion to duty, and for saving a very dangerous situation under particularly gallant circumstances during an attack against the Hindenburg defences on 30th September 1918. In the initial assault on the enemy’s positions this soldier went forward with great dash and determination, and was one of the first men of his Company to rush the trench which was their objective.

Seeing him rush in with his bayonet with such exceptional skill and daring, his comrades were inspired and followed his example. Although the enemy shell and machine gun fire was extremely heavy, the enemy trench garrison was soon overcome. In the assault the attacking troops were weakened by casualties, and, as they were too few to cover the whole front of attack, a considerable gap was left between Private RYAN’S Battalion’s left and the unit on the flank. The enemy counter attacked soon after the objective was reached and a few succeeded in infiltrating through the gap and taking up a position of cover in rear of our men, where they commenced bombing operations. The section of trench occupied by Private RYAN and his comrades was now under fire from front and rear, and for a time it seemed that the enemy was certain to force his way through. The situation was critical and necessitated prompt action by someone in authority. Private RYAN found that there were no officers or N.C.O.s near, they had become casualties in the assault.

Appreciating the situation at once, he organised the few men nearest him, and led them out to attack the enemy with bomb and bayonet. Some of his party fell victims to the enemy’s bombs, and he finally dashed into the enemy position of cover with only 3 men. The enemy were three times their number, but by skilful bayonet work, they succeeded in killing the first three Germans on the enemy’s flank. Moving along the embankment, Private RYAN alone rushed the remainder of the enemy with bombs. It was while thus engaged he fell wounded, but his dashing bombing assault drove the enemy clear of our position. Those who what not killed or wounded by his bombs fell victims to our Lewis Gunners as they retired across No Man’s Land.

A particularly dangerous situation had been saved by this gallant soldier, whose display of determined bravery and initiative was witnessed by the men of the two attacking Battalions, who, inspired and urged by it, fought skilfully and bravely for two days.’

Ryan returned to Australia in October 1919 and was discharged on 10 January 1920. Little is known of his post war life apart from the fact that it was a difficult one, particularly during the Depression. At one stage he was on the road for four years in search of work. He died of pneumonia at Royal Melbourne Hospital on 3 June 1941. Buried with full military honours, his guard of honour was formed by eight Victoria Cross winners.