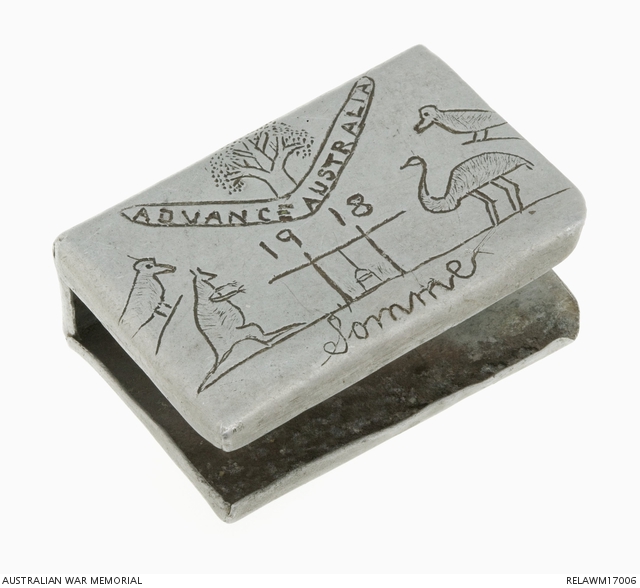 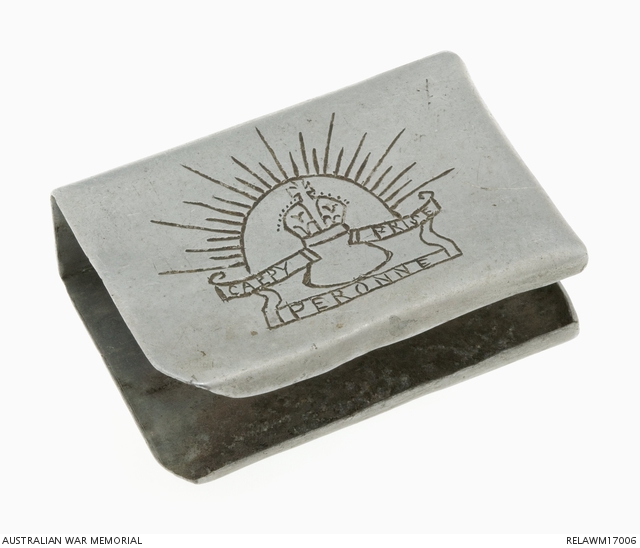 Match box cover made from a single piece of bent duraluminium (an aluminium alloy) from a German Zeppelin. The piece is folded into three parts - front, back and spine - to a size slightly larger than a box of matches.The open edges on two side have been bent to prevent the matchbox from slipping out of the cover, with one short end left unbent to allow for a match box to be inserted or removed. One side is engraved with a boomerang with 'ADVANCE AUSTRALIA' written on it surmounted by a tree. Beneath the boomerang is the date '1918' and an image of a camp fire with a billy can. On one side of the fire is an emu and a bird on a branch; on the other side a kangaroo and another bird. Beneath the camp fire is 'Somme'. The other side of the cover is engraved with an image of the army Rising Sun badge with 'CAPPY FRISE PERONNE' written on the scroll.

Match box cover collected by 3302 Driver Charles Vivian Coghill, a 24 year old farmer when he enlisted in the AIF on 20 July 1915. Driver Coghill embarked on 24 November 1915 from Sydney with the 6th Field Company Engineers aboard HMAT Ceramic. After a few months serving in Egypt, Coghill embarked for France, arriving in Marseilles on 17 March 1916. He served in France and Belgium. He went on 'English leave' for two weeks in February 1918. On 23 December he returned to England for more leave, during which he married an English woman, Honor Stacey Bomford at the Baptist Chapel in Kings Norton, Birmingham, on 31 December 1918. Coghill embarked from England in July 1919, arriving in Australia on 6 September aboard the ship, Indarra. He was discharged on 29 October. The match box cover is made from a piece of duraluminium (an aluminium alloy) from an unknown German Zeppelin, probably one brought down over France in the latter years of the war.