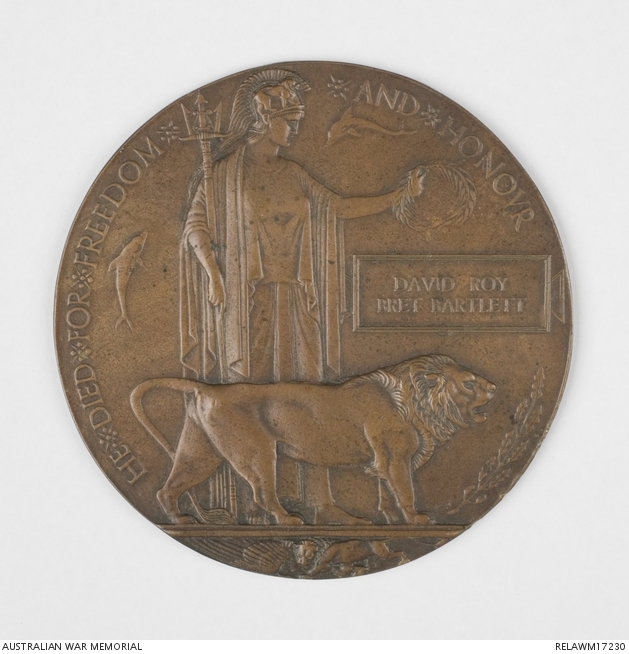 Bronze next of kin plaque, showing on the obverse, Britannia holding a laurel wreath, the British lion, dolphins, a spray of oak leaves and the words 'HE DIED FOR FREEDOM AND HONOUR' around the edge. Beneath the main figures, the British lion defeats the German eagle. The initials 'ECP', for the designer Edward Carter Preston appear above the lion's right forepaw. A raised rectangle above the lion's head bears the name 'DAVID ROY BRETT BARTLETT'.

Born in Cowra, New South Wales, David Roy Brett Bartlett was employed as a motor driver, according to his wife, and as a clerk and tobacco grower, according to his father, when he enlisted in the AIF in Sydney on 9 March 1917. After initial training Bartlett was posted a private, service number 3263, to the 8th reinforcements for the 35th Battalion. He sailed for overseas service from Sydney on 2 August, aboard HMAT A28 Miltiades, and arrived in Glasgow, Scotland, two months later.

After further training in England Bartlett joined C Company of his battalion in France on 8 February 1918. At Morlancourt early in the morning of 6 May, while waiting for the artillery barrage to lift the signal to advance, Bartlett was killed by a shell from the barrage. He was 24. Although his body was buried the grave could not be marked as fighting over the area continued for four days, and his grave was not subsequently relocated. Bartlett's name is commemorated on the Villers-Bretonneux Memorial.

This plaque was sent to Bartlett's widow, Emily, in April 1923.