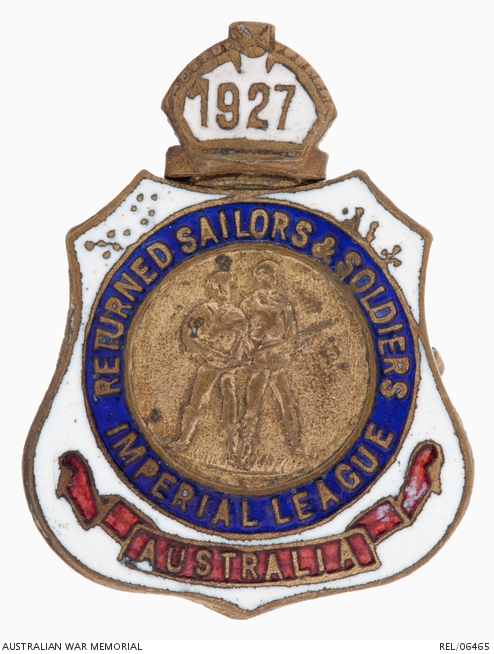 Returned Sailors and Soldiers Imperial League of Australia Badge. The obverse of the shield shaped badge is surmounted by a King's Crown with white enamel in the centre and '1927' within. The centre of the badge shows a sailor and a soldier in raised detail. A blue enamel circle surrounds the central detail and has 'RETURNED SAILORS & SOLDIERS / IMPERIAL LEAGUE' in raised brass lettering. The outer edges of the shield are white enamel. Representing unity are the floral symbols for Australia and the United Kingdom in the top left and right hand shoulders of the shield; Wattle for Australia, leek for Wales, rose for England, thistle for Scotland and the shamrock for Ireland. At the bottom of the badge is a red enamelled scroll with 'AUSTRALIA' written in raised brass lettering. On the reverse of the badge is attached a brooch pin for securing the badge to clothing. Stamped at the top of the badge is the maker's details 'SIMES'.