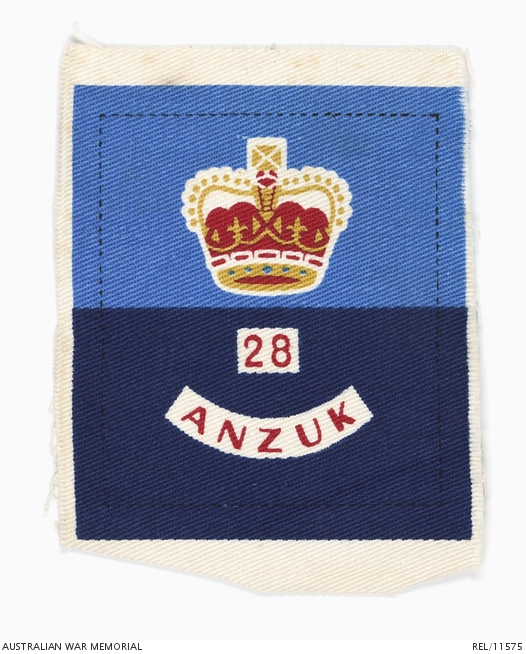 Cotton formation badge of 28 ANZUK Brigade Group. The rectangular sleeve badge is printed on a roughly rectangular piece of white cotton drill, and is divided horizontally, the upper half in light blue, the lower half in dark blue. Printed in red, blue and gold on the upper half is the Queen's crown, while the lower half contains the red numeral '28' on a white background above a curved white box containing the word 'ANZUK' in red. A black dotted rectangular border is printed on the badge to indicate the size at which it should be displayed on the uniform.

Established in 1971, 'ANZUK Force' (a tri-service combination of Australian, New Zealand, United Kingdom, Malaysian and Singaporean forces) was based in Singapore and Malaysia. It was the successor to the post-Second World War 'Far East Land Forces' (FARELF), and was intended to maintain the Commonwealth defence presence in Malaysia. 28 ANZUK Brigade Group was the successor to 28 Commonwealth Brigade, which had served in Korea and Malaya during the 1950s and 60s. In 1973, Australia withdrew its forces, and by 1974, ANZUK Force had been disbanded. This badge may have been made in Australia or produced 'in-country' during deployment. Both the fabric used and the printing method can also be seen in cloth badges produced in Singapore in the same period for troops allocated to the Singapore District and Borneo Directorate.