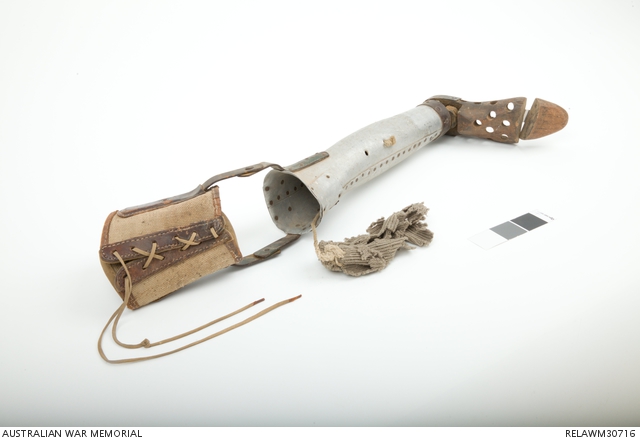 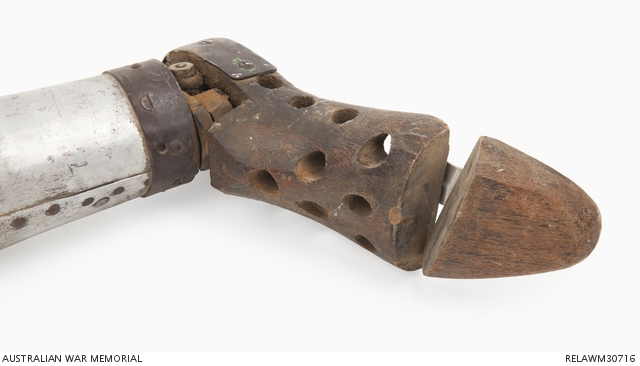 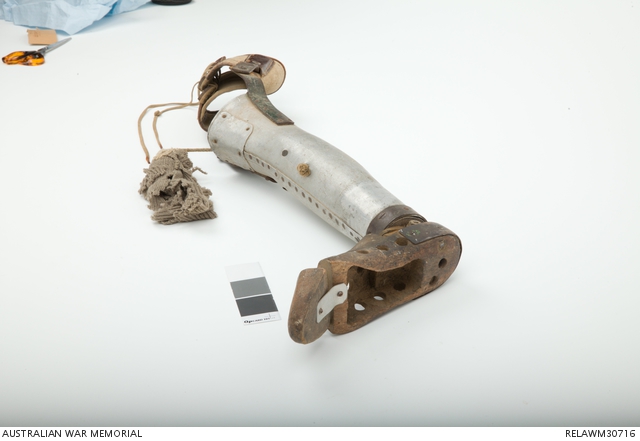 Right below knee metal artificial leg with wooden foot. The calf is made from five rivetted pieces of aluminium scavenged from wrecked aircraft. The main part of the leg is made from two large pieces of aluminium rivetted together down the front and back and shaped to look like a calf, which is 400 mm long. At the top back of the calf is a smaller piece of aluminium, 42 mm high by 62 mm wide. At the front top are two small pieces of aluminium. One is 42 mm high by 40 mm wide and it is partially obscured by the second piece, which overlaps it. The second piece is 90 mm high and 70 mm wide. These pieces cover the rivets at the top of the two largest pieces and may have been added to help reinforce the top of the calf.

Three ventilation holes are drilled in the front of the calf. The lowest has a knotted rope through it, which leads up the leg to the attached remains of a woollen sock, which would have been worn on the leg stump to protect it from chaffing on the aluminium and the webbing harness. The edges of the top of the calf have been rolled outwards slightly, also to protect the stump.

A flat length of steel is located at the top of either side of the calf. Each is attached to another piece of flat steel. They all have remnants of dark green paint attached. They are joined by a screw, to bend with the knee.

The uppermost pieces of steel are attached to a webbing harness. A leather 'pouch' covers the top of the steel, and is sewn to the webbing harness along the longer edges and rounded end. A rivet is threaded through a washer, the leather, the steel and the webbing to hold the items all together, with the leather 'pouch' ensuring the steel does not move from its position. The body of the webbing harness is edged with strips of thin leather for comfort on the top and bottom edges. At the front of the harness, thick leather reinforcement has been attached on each end, with a cotton backing on the inside of the harnass. Six holes made through which is threaded a boot lace to tighten or loosen the harness. The harness has a webbing tongue, which is attached along the side and has cotton tape edges for comfort.

A piece of flat steel is attached around the base of the aluminium calf, near the ankle area. This is rivetted to the aluminium and also has screws through it, securing a cylindrical piece of wood, which is inserted in the bottom of the calf, in place inside the leg. This piece of wood is attached to a carved 'foot' which is in two pieces. The base of the main part of the foot has been carved out the reduce the weight. several holes have been drilled through the foot. The toe section has been carved from a separate piece of wood. It is attached to the main part of the foot by a rectangular piece of white metal, which may be a post war addition.

This relic relates to the service of WX16376 Private Stephen John Gleeson. Gleeson was born on 16 April 1923 at the town of Boulder, Western Australia and was working as a trucker when he enlisted in the Second AIF on 8 September 1941, overstating his age by four years. After a period of training he was allocated to the 2/4th Machine Gun Battalion. He embarked for overseas service from Fremantle on 15 January 1942, arriving at Singapore on 26 January. He was at Singapore for less than a month before he was taken prisoner by the Japanese on 15 February and was interned at Changi.

Gleeson was in hospital with appendicitis for four days from 3 October. On 13 December he was readmitted with appendicitis. This time his appendix was removed and he was discharged on 10 January. Four months later on 8 May 1943 he embarked with H Force to work on the Thai-Burma Railway.

In all, 9,500 Australian prisoners of war worked on the construction of the Burma-Thailand Railway, which ran from Bampong, Thailand, to Thanbyuzayat, Burma. The railway was completed on 16 October 1943.

After completion of the railway the surviving prisoners were sent to recovery camp. By the end of December 1943, most prisoners from H force had returned to Changi, with only the sickest remaining behind.

At some point after he left for Thailand, possibly in 1943 while working on the railway, Gleeson's right leg was amputated below the knee. While working on the railway in the jungle, many prisoners got cuts or abrasions on their legs due to the lack of proper clothing and footwear. These sores often became septic due to the conditions the prisoners were living in, and in a large number of occasions caused for the limbs to be amputated. This is what may have happened to Gleeson.

Gleeson remained in Changi from 1944 and was liberated from Changi on 5 September 1945.

This leg was made for Gleeson while in Changi by NX67447 Warrant Officer Arthur Henry Mason Purdon, 2/30th Battalion. Purdon was born on 24 December 1900 and was working as a health inspector when he enlisted in the Second AIF on 17 January 1941. He had earlier served in the First World War in the 3rd Battalion, AIF with the service number 7797 and in the permanent Military Forces. In 1926 he married Doris Fitzgerald.

He embarked for Singapore with the 2/30th Battalion on 29 July, arriving 15 August. He fought with his battalion at Gemas, Malaya and when the battalion withdrew from the area on 16 January 1942, he was the last to leave as he assisted the wounded from the battlefield while under small arms and mortar fire. During the fighting he also took rations forward despite the bombing and shelling, always getting the food to the most forward troops. Purdon was later awarded the Distinguished Conduct Medal for his actions during this time.

He was also taken prisoner at Singapore on 15 February 1942 and was initially held at Changi. During his captivity he established a limb factory to make artificial limbs made from aluminium and other waste metal taken from Japanese dumps for his fellow prisoners who had their legs amputated. As part of this work he invented the Purdon joint, which allowed the limbs to move in a similar fashion to a normal leg. By the end of April 1944 he had made limbs for 43 men and was going to have to make more.