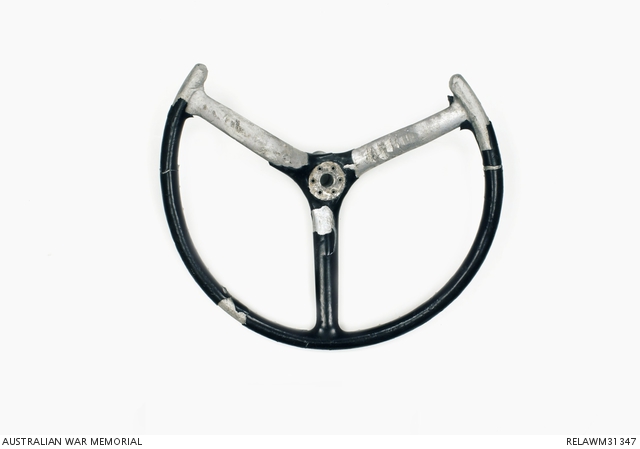 Semi-circular aluminium control wheel with three spokes eminating from central spline hole, which is surrounded by six screw holes. Grip ridges are cast into rear of wheel. The wheel has a plastic coating.

Salvaged from Sunderland flying boat EJ134 'N/461' of 461 Squadron RAAF. On 2 June 1943, N/461 (N for Nuts) was being flown by the following crew: Captain, Flight Lieutenant C B Walker; first pilot, Pilot Officer W J Dowling; second pilot J C Amiss; navigator, Flying Officer (F/O) K McD Simpson; engineers, Sergeant E C E Miles (RAF) and Sergeant P K Turner; wireless operators, Flight Sergeants (Flt Sgt) E A Fuller (RAF) and Flt Sgt S F Miller; air gunners, Sgt A Lane, Sgt L S Watson and Flt Sgt R Goode (rear gunner). N/461 took off from Pembroke dock, UK at 1:30pm. At 7:00pm she was over the Bay of Biscay, patrolling at an altitude of 2,000 feet in an area popularly known as the 'Tiger country' because of the number of lone aircraft which had been shot down by long-range German fighters in the area. N/461 was attacked by eight Junkers Ju 88 fighters. In the ensuing battle, three Junkers were claimed destroyed and another probably destroyed, whilst the other four were hit and damaged. Sgt Miles was mortally wounded, and F/O Simpson wounded in the legs. Flt Lt Walker suffered from burns. N/461 was so badly damaged that on return to England it was impossible to effect a normal landing, so she was beached at Marazion near Penzance. Lord Portal, Marshal of the RAF, described the action as "an epic battle which will go down to history as one of the finest instances in war of the triumph of coolness, skill and determination against overwhelming odds". Flt Lt Walker was awarded the DSO, F/O Simpson the DFC and Flt Sgts Fuller and Goode the DFM.