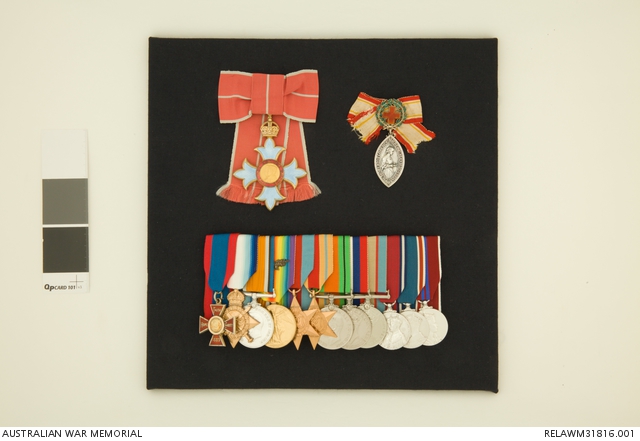 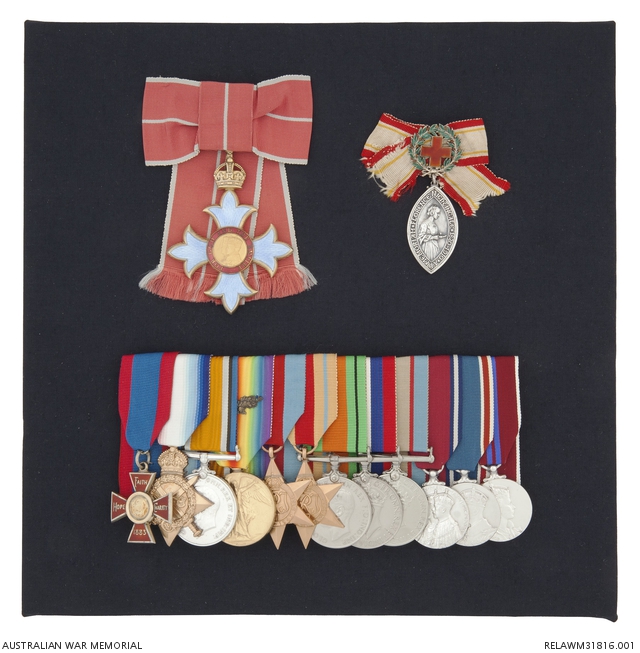 Member of the Order of the British Empire (Military) unnamed as issued.

Associated with the service of Grace Margaret Wilson. Wilson was born in Brisbane, Queensland, on 25 June 1879 and began her nursing training at Brisbane Hospital in 1905. Gaining her certificate in 1908, she became matron in July 1914 and joined the Australian Army Nursing Service (AANS) in October. On 15 April 1915 she was appointed to the AIF as principal matron of 3 Australian General Hospital (AGH) and embarked with this unit for overseas service on 15 May. Initially bound for England, the 3 AGH was transferred to Lemnos to treat casualties from the Gallipoli campaign and by August was caring for 900 patients.

After the evacuation of Gallipoli, 3 AGH was transferred to Abbassia, Egypt. On New Year's Day 1916, Wilson was recommended for the Royal Red Cross, First Class for 'distinguished service in the field'. This award was gazetted on 2 May. She was also awarded three Mentioned in Despatches that year on 5 May, 21 June and 13 July for her service with the Mediterranean Expeditionary Force.

On 25 September, Wilson embarked with 3 AGH from Alexandria for England to join the British Expeditionary Force. Arriving on 5 October, she moved with the hospital first to Brighton, then to Abbeville in France on 11 April 1917. At Abbeville, 3 AGH operated from tents and huts and in May began to admit gassed patients, briefly treating them before they were sent on to other facilities.

On 4 September, Wilson was transferred to England and attached to 2 Australian Auxiliary Hospital, Southall. That month she was also appointed temporary matron-in-chief, AIF Headquarters, due to Matron Evelyn Conyers being on leave. Relinquishing her matron-in chief role on 5 April 1918, Wilson returned to 3 AGH at Abbeville a few weeks later. She served with this unit for the remainder of the war.

Wilson was Mentioned in Despatches for the fourth time on 31 December 1918 and appointed Commander of the Order of the British Empire (Military) on 1 January 1919 'for valuable services rendered in connection with military operations in France and Flanders'. After 3 AGH was disbanded in May, Wilson was attached to 3 Australian Auxiliary Hospital, Dartford, before returning to Australia aboard HMAT Orsova on 23 November. Arriving in Brisbane on 9 January 1920, Wilson was discharged on 4 April.

Wilson continued her nursing career in civilian life as matron of the Children's Hospital, Melbourne from November 1920. She bought a private hospital, 'Somerset House', in East Melbourne in 1922 and become matron-in-chief of the army nursing reserve in August 1925. Awarded the Florence Nightingale medal in 1929 Wilson became matron of the Alfred Hospital in 1933.

Leading the AANS coronation contingent in London in 1937, Wilson resigned from the Alfred Hospital when her matron-in-chief position became a full-time appointment in 1939. Appointed to the Second AIF on 24 September 1940, she embarked for overseas service on 1 October, disembarking in Palestine on 3 November. She worked in the Middle East until 29 April 1941 when she was admitted to 8 British General Hospital, Cairo, suffering diarrhoea and was classified as medically unfit for service on 12 May. Two weeks later she embarked for Australia aboard HMAHS Manunda, arriving in Melbourne on 22 June. Her AIF appointment was terminated on 3 September.

Wilson was president of the Returned Nurses' Club three times, a trustee of the Edith Cavell Trust Fund and of the Shrine of Remembrance, and in 1953 was made a life member of the Returned Sailors', Soldiers' and Airmen's Imperial League of Australia. She died on 12 January 1957 in the Repatriation General Hospital, Heidelberg, Melbourne, and was cremated after a service with full military honours at Christ Church, South Yarra.