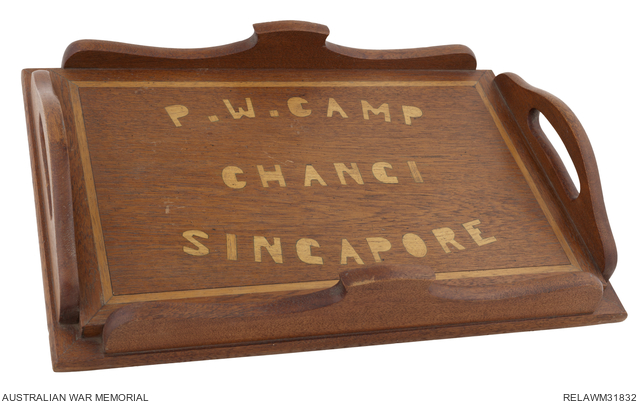 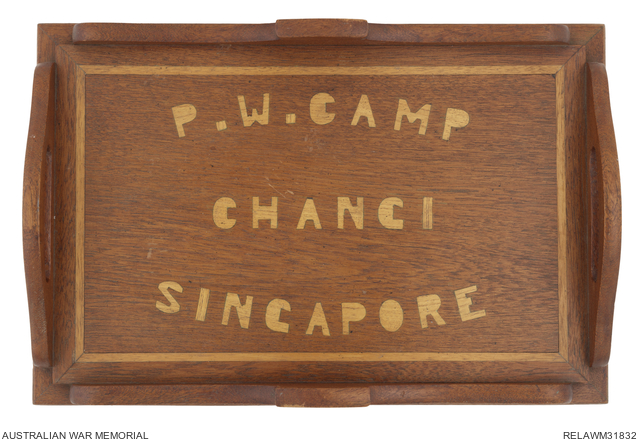 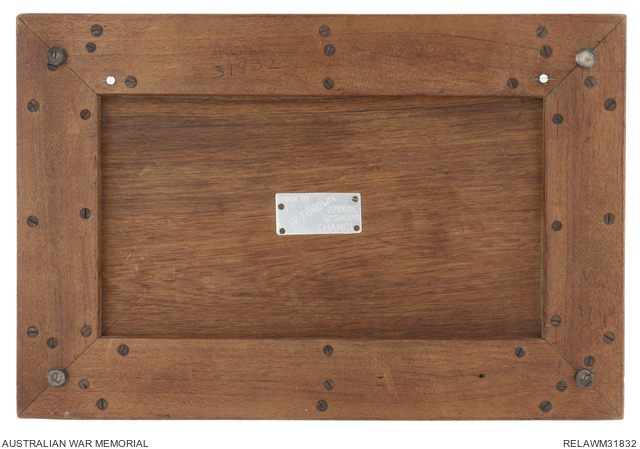 Rectangular teak tray composed of a base with a smaller rectangular inner tray secured to it from beneath with screws. The tray has shaped raised sides, also secured with screws, with handles set into each short side. The body of the central tray section is inlaid with a border of paler coloured rubber wood as well as lettering 'P.W. CAMP/ CHANGI/ SINGAPORE'. A small engraved aluminium plaque attached with screws to the underside of the tray reads: 'MADE BY W.J. BROWN 22 BGDE W/SHOPS CHANGI'. The tray has small rubber feet at each corner.

Claiming to have been born in 1900, Brown was living in Prahran, Melbourne when he enlisted in the Second AIF on 1 July 1940. First World War records, however, show that he had previously served as a sergeant (service number 5055) with the 46th Battalion, and had been born in 1893.

In November 1940 Brown was posted to reinforcements for 2/8th Battalion, then serving in North Africa. Before he could leave Australia he was re-posted to 2/4th Field Workshop in January 1941, part of 8th Division. He arrived in Malaya with his unit the following month.

Brown was captured by the Japanese in February 1942 and became a prisoner of war, held in Changi POW Camp. He was selected to join H Force to work on the Burma-Thailand railway and left Changi on 8 May 1943, leaving his tray behind in Changi. Brown contracted dysentery and died on the railway on 24 July.

The tray came into the possession of Lieutenant-Colonel F G 'Black Jack' Galleghan, the Commanding Officer of AIF Prisoners in Malaya, who had remained in Changi, in 1944. He later donated it to the Australian War Memorial.