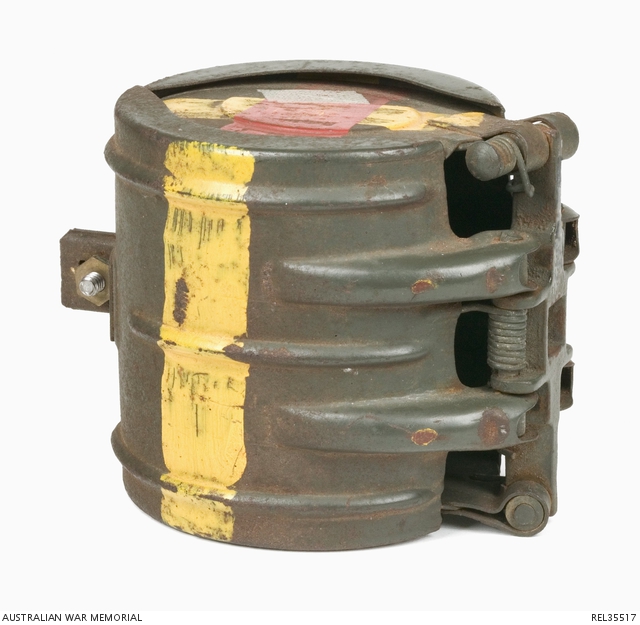 German SD 2 'Butterfly' bomb case. The bomb body, fuze and arming spindle are missing. This is a sheet steel container made in four pieces - two end flaps and two curved pieces which would enclose the actual body of the bomb. These parts are hinged together, the hinges being mounted with torsion springs tending to force the parts of the wings away from the body, but are prevented from opening until a safety pin is pulled when container opens. A small nut and bolt has been attached inplace of the safety pin. The bomb is painted field grey it may have a 20 mm yellow band pained on the body and on the wings at each end. There is also 20 mm red stripe at right angles to the to the yellow stripe on the wings. One end wing is impressed, '13 CMA Z41'.

The SD (Sprengbombe Dickwandig) 2 'Butterfly Bomb' (also known as 'Splitterbombe') was a German 2 kg anti-personnel bomb dropped by the German Luftwaffe during the Second World War. It was so named because the thin cylindrical metal outer braking shell hinged open when it was dropped and gave a superficial appearance of a large butterfly. They were packed into canisters containing between 6 and 108 of the bombs, depending upon the canister type, and were released as the canister fell. The bomb could be fitted with a number of different fuzes. Some, such as the Uhrwerkzunder 41 clockwork fuze gave impact or time detonation, while the Storzunder 70 fuze was primed by the rotation of the brake airscrews, but did not explode on impact. This was very sensitive to vibration and was used for mining roads and airfields. Other fuzes were set with long chemical time delays.

This bomb type was the first cluster bomb ever used operationally - on 29 October 1940 over RAF Wattisham. See also AWM film F05319 for a contemporary movie on the dangers of these weapons.

Born in Sydney in 1914, Private Gallahar was 25 years old when he enlisted in the 2nd AIF in April 1940. He served with the 9th Division, Australian Army Service Corps (AASC) when he was in Tobruk, El Alamein in North Africa and Lae-Finschhafen in New Guinea, but as there were few trucks for the AASC he was employed as infantry. He fell ill in New Guinea and was invalided home. He was serving with 2/6 Ammunition Sub Depot Company, when he was discharged in November 1944.