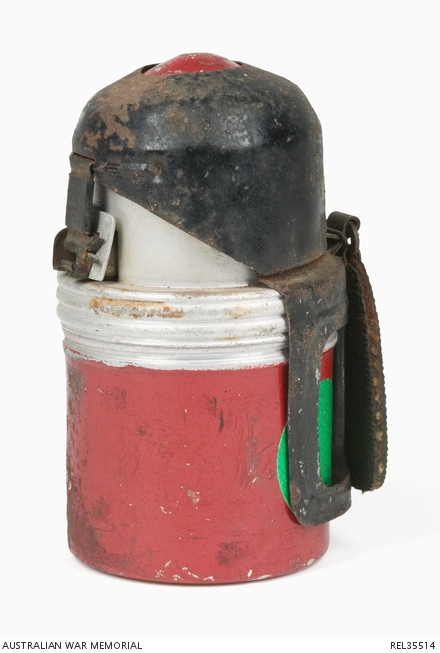 The grenade body is in two parts and features a cylindrical cup-shape base with a rolled on thread which mates with a similar thread rolled on to the flange of the coned top. Two diametrically opposed slots are cut into the top immediately above the flange. The grenade filling secures the two parts by means of a locking spring. The body of the grenade is made from pressed aluminium painted red and carries the safety cover drogue which is painted black. There is a green circular label on the body of the grenade. Also on the body of the grenade is written in black ink, '31962'. Protruding from the side of the safety cover is the end of the brass safety strip to which is attached a rubberised pull tab. The stylised name of the maker, 'OTO' forms part of the base of the grenade.

Sometimes referred to as 'Red Devils' or 'Tomato Bombs' by Allied troops, the OTO Model 35 hand grenade was one of the standard grenades used by the Italian Army during the Second World War. It was one of the grenades encountered by Australian forces when engaging Italian forces in the Western Desert during the Second World War. This grenade was collected at Tobruk by NX11886 Private Sidney William Gallahar. Born in Sydney in 1914, Private Gallahar was 25 years old when he enlisted in the 2nd AIF in April 1940. He served with the 9th Division, Australian Army Service Corps (AASC) when he was in Tobruk, El Alamein in North Africa and Lae-Finschhafen in New Guinea, but as there were few trucks for the AASC he was employed as infantry. He fell ill in New Guinea and was invalided home. He was serving with 2/6 Ammunition Sub Depot Company, when he was discharged in November 1944.