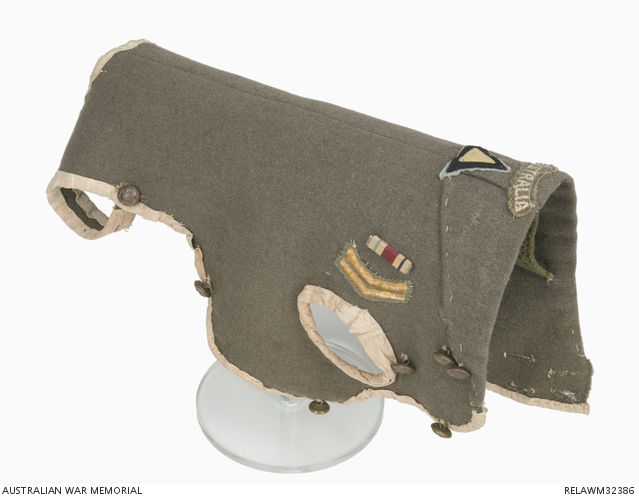 Dog's coat made from khaki wool fabric cut from a standard issue soldier's service dress tunic. The lower edges, front leg holes and the hind leg loops are bound in lightweight white cotton canvas. There is a single seam down the centre back. The inside front of the centre back is lined, for additional warmth, with a section of hand knitted khaki wool scarf, knitted in rib and garter stitch. The neck of the coat is folded back and tacked into place, exposing the inner seam. A white embroidered 'AUSTRALIA' title is sewn to the centre top of the neck as a well as a colour patch for 2/1 Australian Machine Gun Battalion. The right shoulder bears a ribbon bar for the Africa Star and two small improvised cotton 'corporal's chevrons'. Strips have been cut in the back of the coat to loop around the dog's hind legs and are fastened with buttons. A series of buttons, a mix of Australian oxidised brass AMF buttons and British brass General Service buttons, are sewn to the right side of the coat and fasten into roughly cut buttonholes at the neck and under the belly.

During the evacuation of Crete, Horrie was wounded by shrapnel. In Palestine he suffered from the effects of severe cold and snow during winter and this coat was made for him to keep him warm. Here he met Imshe the female terrier mascot of another unit. In February 1942 Moody had Horrie checked by a vet in Tel Aviv before the battalion returned to Australia via Suez. He adapted his pack (RELAWM32387) so that Horrie could be carried concealed in it and trained the dog to travel quietly in it. Jim strapped his helmet over the back of the pack to conceal the ventilation holes he had cut in it. On the troop ship returning home Moody or one of his friends stayed with Horrie at all times ready to conceal him. Imshe and a cat mascot were discovered on the ship, and both were killed in accordance with quarantine regulations. Horrie was smuggled off the ship in Adelaide and sent to live with Jim Moody's father in Melbourne while Jim served in New Guinea.

Nearly sixty years later another story of Horrie's fate was revealed, confirmed by two of Jim Moody's children and by one of his fellow soldiers in the signal platoon. Moody told them that in the week before Horrie was surrendered, he searched the Dog Pound for a look-alike dog. Having located one, he bought it for five shillings and surrendered this substitute 'Horrie' instead. The real Horrie was said to have lived out his life near Corryong in northern Victoria where he is said to have sired many puppies, although it is possible these puppies were confused with those of Imshe II, the dog Moody bought after Horrie's death.