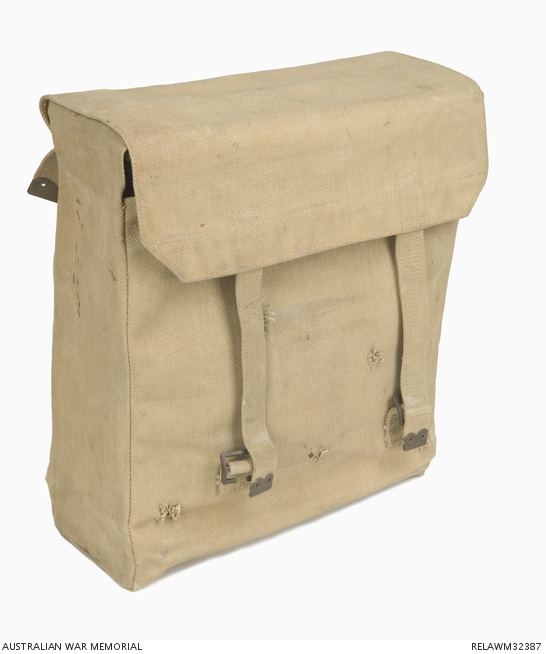 Pattern 1937 khaki cotton webbing haversack, stamped inside the flap 'M.E Co. 1940' with a broad arrow. The pack has been modified to carry and conceal a small dog by the insertion of sections of wooden packing crate, creating a rigid frame around the inner sides and under the flap of the pack. The wood across the top, inside the flap, has four steel and rubber staples nailed to it through which are threaded a leather boot lace that secures the wood to the sides of the haversack. A large slit has been cut in the back and then 'repaired' with loosely woven lightweight cord and leather thong, allowing air to reach the concealed dog.

During the evacuation of Crete, Horrie was wounded by shrapnel. In Palestine he suffered from the effects of severe cold and snow during winter and a coat was made for him to keep him warm (RELAWM32386). Here he met Imshe the female terrier mascot of another unit. In February 1942 Moody had Horrie checked by a vet in Tel Aviv before the battalion returned to Australia via Suez. He adapted this pack so that Horrie could be carried concealed in it and trained the dog to travel quietly in it. Jim strapped his helmet over the back of the pack to conceal the ventilation holes he had cut in it. On the troop ship returning home Moody or one of his friends stayed with Horrie at all times ready to conceal him. Imshe and a cat mascot were discovered on the ship, and both were killed in accordance with quarantine regulations. Horrie was smuggled off the ship in Adelaide and sent to live with Jim Moody's father in Melbourne while Jim served in New Guinea.

Nearly sixty years later another story of Horrie's fate was revealed, confirmed by two of Jim Moody's children and by one of his fellow soldiers in the signal platoon. Moody told them that in the week before Horrie was surrendered, he searched the Dog Pound for a look-alike dog. Having located one, he bought it for five shillings and surrendered this substitute 'Horrie' instead. The real Horrie was said to have lived out his life near Corryong in northern Victoria where he is said to have sired many puppies, although it is possible these puppies were confused with the puppies of Imshe II, the dog Moody bought after Horrie's death.