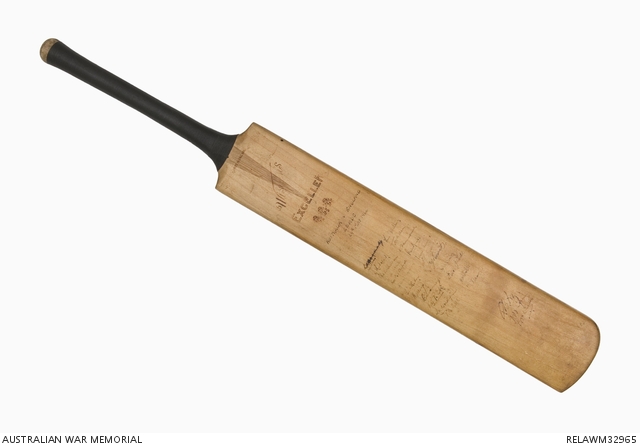 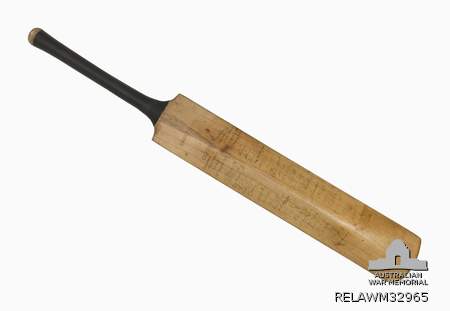 A signed cricket bat commemorating cricket matches played by Australian (RAAF), Dominion Services and England cricket teams at Lord's on 29 May 1944, and 7 and 8 August 1944. This is a wide-grained cricket bat with the handle wrapped tightly in twine. There is no rubber grip. The face of the bat is impressed across the splice with 'MADE IN ENGLAND' and 'Wisden's'. On each side of the splice there is an impressed Wisden's Royal Warrant seal, both of which have been worn almost smooth and over which are the words 'Wisden London' and below which is 'BY APPOINTMENT TO HIS ROYAL MAJESTY KING GEORGE V'. Just below the splice is impressed 'EXCELLOR' above three lions rampant. Below the lions and written in ink is 'AUSTRALIA V ENGLAND LORDS 29th MAY 1944'. Below this in two columns - Australian team on the left and England team on the right - are the players' signatures. The Australian signatures are those of D K Carmmody, A W Roper, J A Workman, W A Roach, R M Stanford, A D McDonald, E A Baker, [illegible], S G Sismey, R S Ellis, D R Cristofani and K R Miller. The England signatures are those of L Hutton, G O B Allen, W R Hammond, R W V Robins, L E G Ames, W J Edrich, C J Barnett, T E Bailey, L J Todd, A W H Mallett, T G Evans. Further down are the signatures of C B Fry (England cricketer and sportsman), A P F Chapman (England cricketer) and P F Warner (Chairman of the Marylebone Cricket Club). On the back of the bat at the shoulder is written 'RAAF Only' in ink. Across the splice is impressed 'SHORTHANDLE' and 'EXTRA SPECIAL'. Below this and written in ink, in two columns, is 'ENGLAND V AUSTRALIA LORDS 8th August 1944' and 'ENGLAND V DOMINIONS LORDS 9th August 1944'. Below the former are the signatures of the England team; W R Hammond, T G Evans, C Washbrook, W J Edrich, D C H Townsend, G O B Allen, A W H Mallett, D V P Wright, R T Simpson, L J Todd, J D B Robertson, and the Australian team; S G Simsey, E A Williams, R M Stanford, A W Roper, C T Calvert, R S Ellis, D R Cristofani, K R Miller and J A Workman. Below the latter are the signatures of the Dominions team; S G Simsey, J R Henderson, J A Workman, R M Stanford, E A Williams, A W Roper, C S Dempster (New Zealand), C T Calvert, F T Braddock (New Zealand), R S Ellis, D R Cristofani, K R Miller, C B Clarke (West Indies) and the England team; W R Hammond, R T Simspon, T E Bailey, L B Fishlock, A D G Matthews, S C Griffith, A W H Mallett, R W V Robins and L J Todd.

Made by the famous Wisden's, this bat was signed by the players and three contemporary English cricket personalities, to commemorate three one-day cricket matches played at the Lord's on 29 May (England v Australia), 7 August (England v Australia) and 8 August (England v Dominions) 1944. The dates written on the bat incorrectly indicate the August matches as being played on 8 and 9 August. The teams in each match were made up of serviceman on active service in the European theatre - mostly RAF and RAAF personnel - and contained many renowned cricketers, such as England's Len Hutton, Cyril Washbrook and George 'Gubby' Allen and Australia's Keith Miller, Bob Cristofani and Stan Sismey. William Roach, who opened the batting for Australia in the match of 29 May, was killed in action over the Friesian Islands just ten days later. Not long after the same match, Keith Carmody, the noted New South Wales batsman, was shot down off the Dutch coast, but survived to spend the remainder of the war as a prisoner of war. The cricket matches played by the 1st Australian Imperial Force (AIF) in Britain immediately after the First World War were immensely popular and had proven an effective remedy to the tensions of the time. The program of matches at Lord's in 1944, was organised by the MCC's Deputy Secretary Sir Pelham Warner, whose signature is on the bat and who hoped to repeat the success of these earlier fixtures because 'it was realised by the Government, and by the Services, that cricket provided a healthy and restful antidote to war strain ...'. These matches, and others like them, were also immensely popular with the public and were significant events in reassuring a war-weary society enduring its fifth year of war. While not actual Tests, the quality of the participants as well as the sporting and social significance of these matches, meant they were given First Class status by the Marylebone Cricket Club (MCC). These matches were also the precursors of the 'Victory Tests' played between England and Australia at wars end in 1945. While the 'Victory Tests' served notice almost a year later that the war was indeed over and that normality and some level of certainty may have finally returned after so long at war, it was the matches played during the dark days of the war that were so marked in the memory of the great Keith Miller, 'Of all the cricket I ever played," he said, ' ... the wartime cricket at Lord's is the best and the happiest. There was no niggling. People were just glad to be alive.'. Match results were, 29 May; England won by 6 wickets. 7 August; England won by 33 runs. 8 August; Drawn.