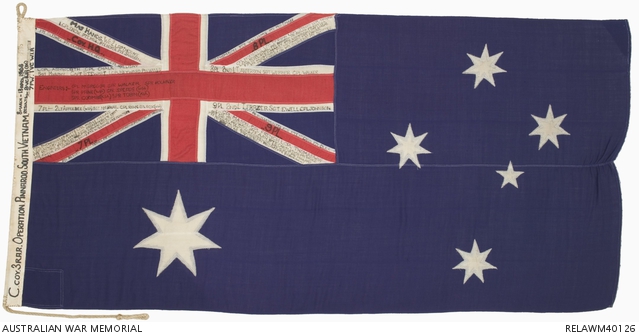 This flag was raised by signallers of Company Headquarters, 'C' Company, 3 RAR, on Hill 323 in the Long Hai Hills, Vietnam, during Operation Pinnaroo on 19 March, 1968. The company had been warned for a move up the hill by foot through suspected minefields to secure a landing zone for the insertion of 'A' Company. The flag was carried up the hill by the signallers and raised on top of a high rock at the top of Hill 323. A note of interest is that shortly after the raising the flag, battalion headquarters received a request for ground clearance from a US warship lying off shore to enable them to shoot at a 'VC flag which has just been raised'.