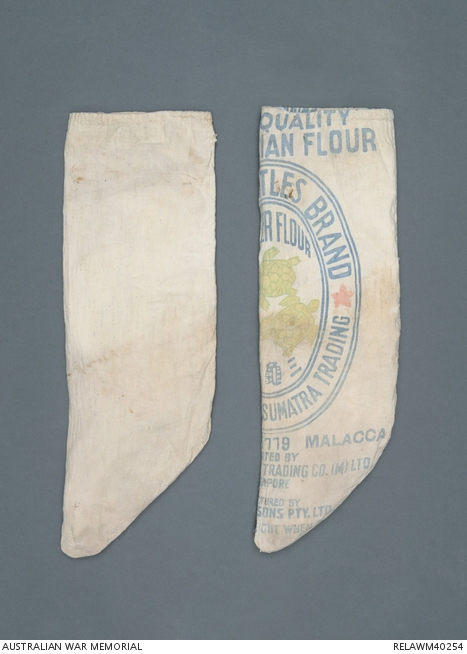 Pair of cotton over-boots hand sewn from a flour sack. To form each over-boot, half of the sack has been folded vertically and stitched together to form a tube, with the bottom tapering to form a roughly triangular boot shape. The open top ends have been hemmed, and were originally elasticised, although the elastic has now perished. One of the over-boots is of unmarked cotton, while the other, evidently made from the front of the bag, is printed in blue, red, yellow and green ink. The words 'PRODUCT OF AUSTRALIA BEST QUALITY AUSTRALIAN FLOUR THREE TURTLES BRAND ROLLER FLOUR MFD FOR BORNEO SUMATRA TRADING HSH 15779 MALACCA IMPORTED BY BORNEO SUMATRA TRADING CO (M) LTD. SINGAPORE. MANUFACTURED BY STRATTON & SONS PTY. LTD LBS GROSS WEIGHT WHEN' (remainder obscured) are printed on the cotton, along with the trademark of three green and yellow turtles and two five-pointed red stars. The foot sections of each over-boot are discoloured from contact with wet ground.

Pair of over-boots recovered from one of the Communist Terrorists killed by a patrol from 7 Platoon, 3 Battalion, the Royal Australian Regiment, on 23 April, 1958. The two Communist Terrorists killed in this action, which took place in the Sungei Siput rubber plantation, north east of Sungei Siput village in the State of Perak, Malaya, were later identified as a Chinese and an Indian from the Lintang South Armed Work Force (AWF). A third man, believed to be wounded, escaped. The jeep-mounted patrol from 7 Platoon, operating under the command of B Company, set out at first light on 23 April, intending to try and cut the attempted escape route of a group of Communist Terrorists who had been ambushed by A Company the previous night. One man was eventually spotted hiding behind a rubber tree, and in the jeep-borne pursuit which followed, the two men were killed by machine gun fire. They were the first confirmed kills of 3 RAR's tour of Malaya, following a series of indecisive clashes. The over-boots were used by terrorists to hide the distinctive pattern of their boots when moving along jungle tracks, and were made from a flour sack of Australian origin.