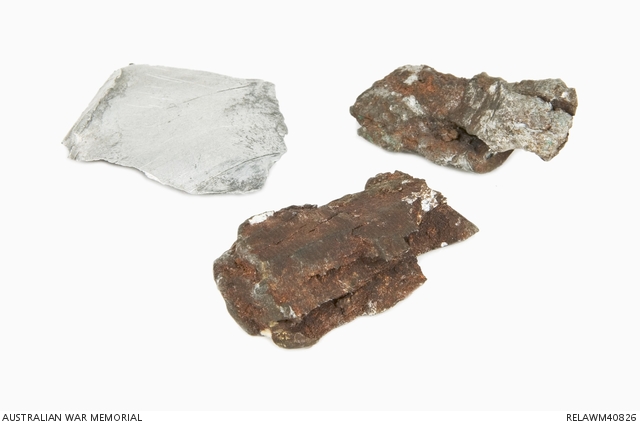 Two small pieces of oblong reddish-brown coloured shrapnel, and a small almost rectangular pale-coloured piece of ship's side plating possibly made from aluminium. All of the pieces are not longer than approximately 40 mm.

37171 Chief Petty Officer (Writer) John Dudley Moy, who served in HMAS Perth from 27 July 1967 to 26 May 1969, collected these relics after his ship was hit by fire from North Vietnamese coastal batteries on 18 October 1967. Perth was participating in Operation Sea Dragon in the Gulf of Tonkin, tasked with attacking enemy waterbourne logistic craft (WBLC) and hostile sites inside North Vietnamese territory at the time of the incident. The destroyer HMAS Perth and the cruiser US Newport News were engaged by twelveth 85 or 100 mm batteries, which fired up to 200 rounds at them at a range of 16500 yards while they were investigating a group of fishing junks near Chau Pai south of Sam Son. A direct hit was sustained on Mount 52, which glanced off, penetrated the 01 deck and exploded in the confidential books vault wounding 7 sailors. P56564 Leading Seaman W J Young was later awarded the Distinguished Service Medal for his actions as gun captain of the after mount, and Lieutenant Commander J B Wells was mentioned in despatches for 'courage and calmness under fire' while officer of the watch during the incident.