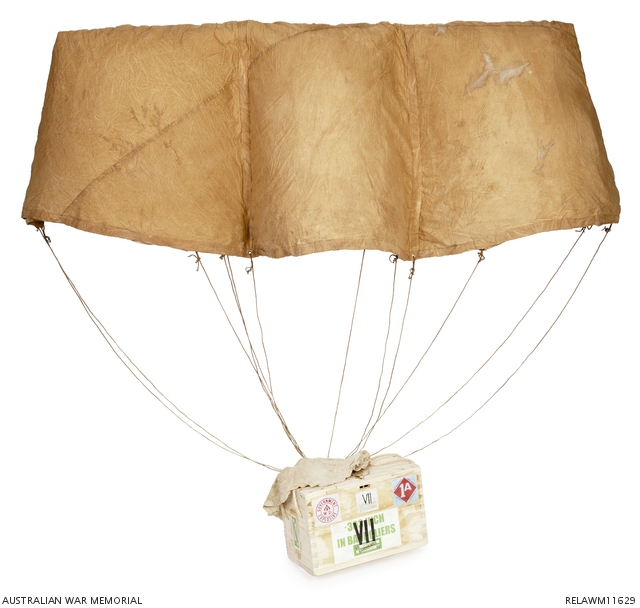 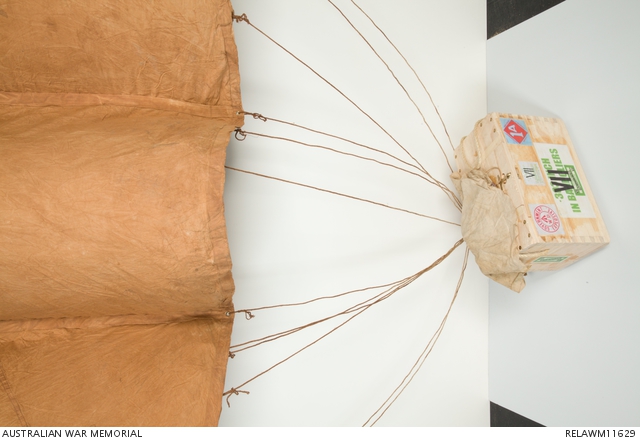 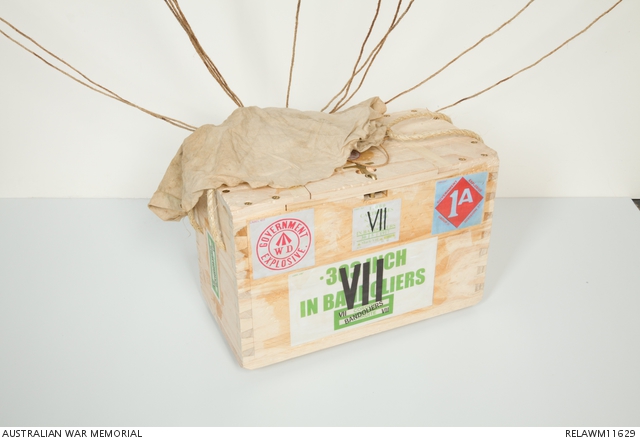 Small brown-dyed cotton parachute made from eleven panels, each joined by a vertical rib. At the base of each rib is a brass eyelet to which is tied a length of twisted hemp twine; there are twelve lengths of twine in total; these are in turn tied to a thick rope harness, which originally would have supported an ammunition box. There is a small vent at the apex of the parachute. There appears to be a waterproofing layer applied to the cotton, resulting in a stiffened finish.

This parachute was developed and made by 3 Squadron, Australian Flying Corps at their aerodrome at Villers Bocage in late June / early July 1918 and used by an aircraft of 9 Squadron, Royal Air Force to drop ammunition to the 13th Battalion near Vaire Wood on 4 July 1918 during the Battle of Hamel. This new innovation of using aircraft to resupply ammunition was part of a co-ordinated assault on a limited front using air and ground forces, a strategy employed for the first time at Hamel and used to devastating effect during the Battle of Amiens the following month.

Lieutenant General Monash, in his book "The Australian Victories in France in 1918" noted that: "It was Captain Wackett, of the Australian Flying Corps, who perfected these ideas, and who trained the pilots to put them into practice. Each machine-gun crew, upon reaching its appointed locality, spread upon the ground a large V-shaped canvas (V representing the word "Vickers") as an intimation to the air of their whereabouts, and that they needed ammunition. After a very little training, the air-pilots were able to drop this ammunition from a height of at least 1,000 feet to well within 100 yards of the appointed spot. In this way, at least 100,000 rounds of ammunition were successfully distributed during this battle, with obvious economy in lives and wounds. The method thus initiated became general during later months."