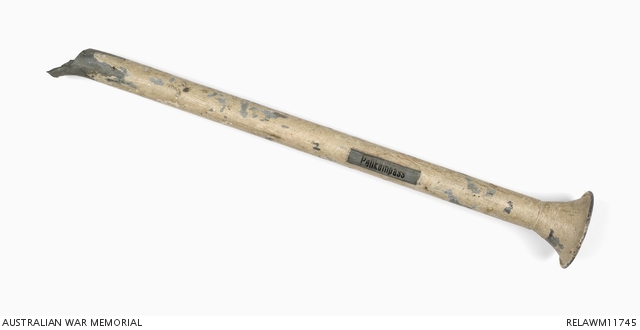 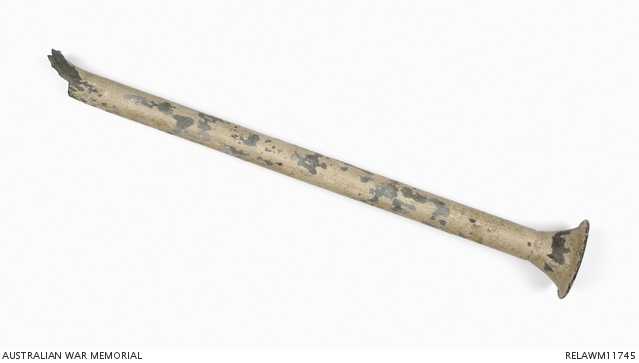 Long thin steel tube with a flared end. The other end is torn. The original cream paint is scratched and chipped - a rectangle of unpainted metal towards the flared end is impressed with the word "Peilkompass" (bearing compass) and the letters filled with black paint.

This speaking or voice tube which ran from the commander's bridge to the bearing compass room was removed from the German battlecruiser SMS Hindenburg at Scapa Flow, Orkney, Scotland after the surrender of the German High Seas Fleet, by Lieutenant John Alan Kenyon, Royal Naval Air Service who was there when the German ships were scuttled by their German crews who mistakenly assumed that British were going to seize them ahead of the signing of the Versailles Peace Treaty. The scuttling occurred on 21 June 1919 and sunk 52 out of the 74 German surrendered ships. It is unclear whether the speaking tube was recovered before or after the Hindenburg was scuttled (it was the last ship to sink), but her twin funnels, the masts and the upper works were still visible after the ship sank, so the tube could have conceivably been removed after the scuttling. The bearing compass room sat high on the ship above the commander's bridge

John Alan Kenyon, an Englishman, emigrated to Australia in the 1920 after he was retrenched from the Royal Navy in the post war slump. He was associated with Efftee Films, a film production company started by Frank William Thring in 1930 where he worked as the art director until 1935 when he moved on to Cinesound as a special effect director and later as an art director for JC Williamson. Kenyon's memories include a mention of this: "With a Royal Navy commission, I, as hundreds of others, had been retired to the unemployed list... I [left] Scapa Flow—a body of water in the Orkney Islands— [and] spent a week or so travelling around saying goodbye to my relatives. I sailed from England, landed one day in Melbourne". He died in 1972.