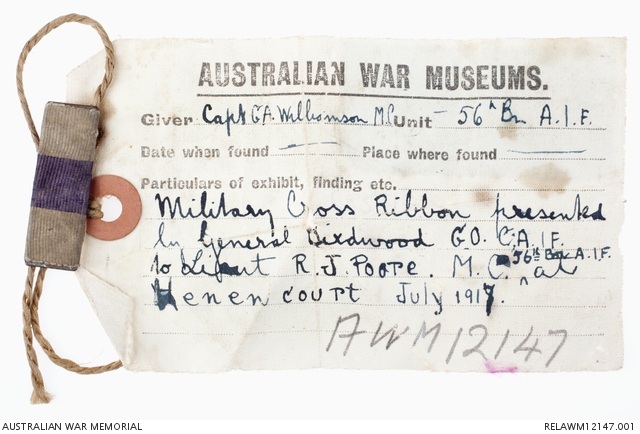 Military Cross ribbon bar with white and purple silk ribbon and a brooch-pin back. Tied to the ribbon bar with a length of string is a glazed linen Australian War Museums object label (see RELAWM12147.002).

Born in Sale, Victoria in 1886, Robert James Poore was married, working as an engine driver and living in Darlinghurst, Sydney when he enlisted in the AIF on 25 August 1914. 22 Private R J Poore embarked at Sydney aboard HMAT A16 'Star Of Victoria' on 20 October 1914 with B Squadron of the 1st Light Horse Regiment. Poore served on Gallipoli and was was evacuated to Malta and then to England after being wounded in the foot in July 1915. He did not return to his unit until March 1916 when he was allocated to the 1st Reserve Light Horse Regiment. Within days he was transferred to the 4th Division Headquarters at Tel el Kebir and then to the 5th Division Headquarters a week later. In France, in August 1916, Poore was promoted to 2nd Lieutenant and transferred to the 56th Battalion, then to the 14th Machine Gun Company in September.

On 2 April 1917, Poore received a gunshot wound to the thigh during the heavy fighting near Louverval and spent a month recovering in England. Returning to the 56th Battalion in May, he was soon taking part in the fighting at Second Bullecourt. He received the Military Cross for his bravery during an enemy artillery barrage on 14 May. The recommendation for the award reads, 'In the trenches opposite RIENCOURT on 14th May, the Battalion sector was subjected to an intense bombardment. During the bombardment this officer showed very fine leadership and coolness while in charge of a dangerous sector of the line and was largely responsible for checking the losses of his two platoons. He was throughout a splendid example to his men, showing devotion to duty and utter disregard for shell fire. Later, when the Battalion which joined up with his left was attacked, he took two sections of grenadiers across a considerable space of open ground to render them assistance. Although he never actually closed with the enemy, he rendered valuable assistance in establishing bombing posts in the sector attacked, to help break down further attack by the enemy.'.

Poore was wounded - for the third time - on 26th September 1917 during the fighting at Polygon Wood near Ypres, Belgium and spent almost three months recovering in England. He re-joined his unit in December 1917. In September of 1918 was seconded to a training battalion. He returned to Australia on '1914 Leave' on 8th November 1918.