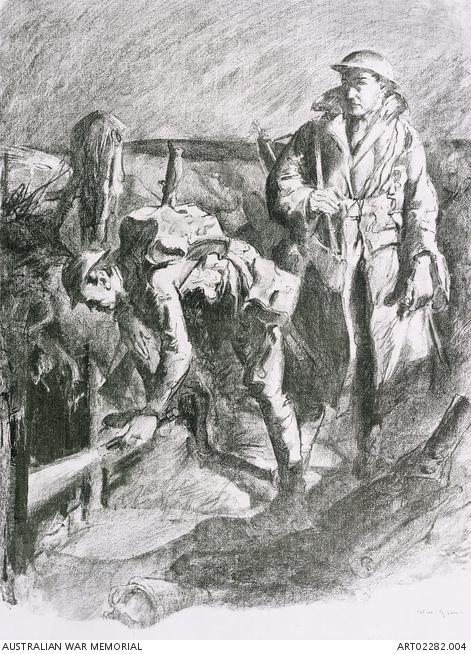 Depicts two Australian soldiers, in uniform, wearing tin helmets, walking through a stretch of German trenches on the Somme, warily inspecting their surroundings for booby traps. One soldier holds a torch and is inspecting a hole in the trench, while the other nervously keeps guard. Will Dyson was the first Australian official war artist to visit the front during the First World War, travelling to France in December 1916, remaining there until May 1917, making records of the Australian involvement in the war. He was formally appointed as an official war artist, attached to the AIF, in May 1917, working in France and London throughout the war. His commission was terminated in March 1920. Ligny-Thilloy; dugout; 1st Australian Division, 3rd Brigade; two soldiers, in full kit and greatcoats, inspecting a dugout in recently captured German trenches at Ligny-Thilloy, February 1917