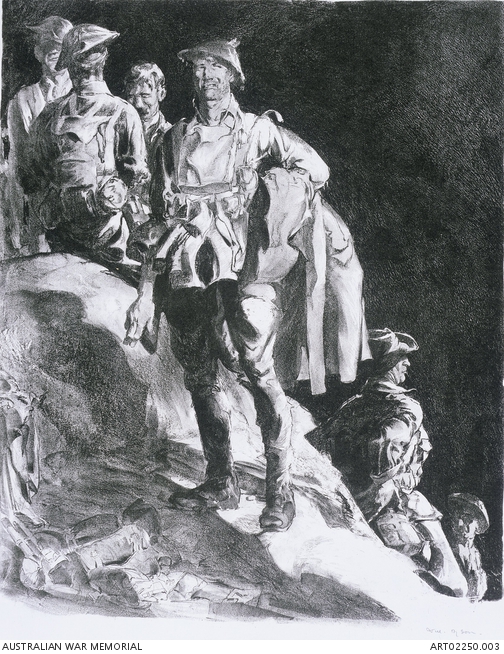 Depicts a number of soldiers in uniform, wearing helmets, resting on the road side awaiting relief. The 'caterpillar' in the title refers to the name of a sunken road south of Ville. Dyson inspected Ville-sur-Ancre with his friend Wilkins, which the A.I.F. captured on 19 May 1917. The drawing for this lithograph was accompanied by the following comments from Dyson; 'In the Caterpillar, near Ville-sur-Ancre the day after passing through the village, while this drawing was being made Capt. Wilkins had crept out of the Caterpillar and through crops at the top, drawing down, through the moving of the crops, a sustained burst of machine gun fire which lasted long enough for me to do this drawing'. Will Dyson was the first Australian official war artist to visit the front during the First World War, travelling to France in December 1916, remaining there until May 1917, making records of the Australian involvement in the war. He was appointed an official war artist, attached to the AIF, in May 1917, working in France and London throughout the war.