Welcome back to the Somme 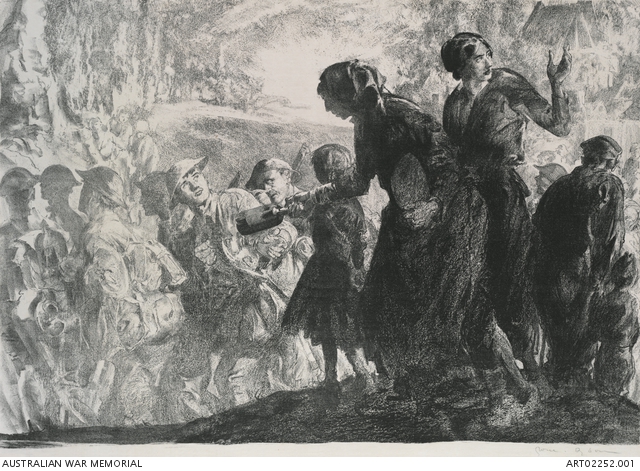 Depicts a group of marching troops in the Somme district. Beside them, on the side of the road, are a group of women and children welcoming Australian troops as they returned to the Somme area to counter the German attacks on March 1918. It has been noted that 'probably in no other year have Australians influenced the destiny of the world as Australian soldiers did by their achievements in these (and later) weeks of 1918. The most vulnerable sector was around the Somme, where stricken French villagers who had been abandoning their homes retraced their steps after Australians arrived with such reassurances as 'Fini retreat mate...beaucoup Australiens ici' (McMullin, R., Will Dyson, p.162). The work was reproduced in the publication 'Australian Chivalry' (1933) with the following caption; 'When the Germans launched their great offensive on the Somme on the 21st March, 1918, the five Australian divisions ...were at once brought south to assist in stemming the onslaught...the reception of the Australians by the local populations was unmistakable and made their return to the Somme a high romance...to say that the French women and children rejoiced to see them again is to report the fact mildly. As the Australian advance guards appeared many of these people...tore their household goods from off the carts again and dragged the old people and youngest children to the roadside to shout 'Vivent les Australiens'".The lithograph was printed between Jul-Oct 1918. It arrived at the Australian High Commission, London on 31 Oct 1918. Will Dyson was the first Australian official war artist to visit the front during the First World War, travelling to France in December 1916, remaining there until May 1917, making records of the Australian involvement in the war. He was formally appointed as an official war artist, attached to the AIF, in May 1917, working in France and London throughout the war. His commission was terminated in March 1920.