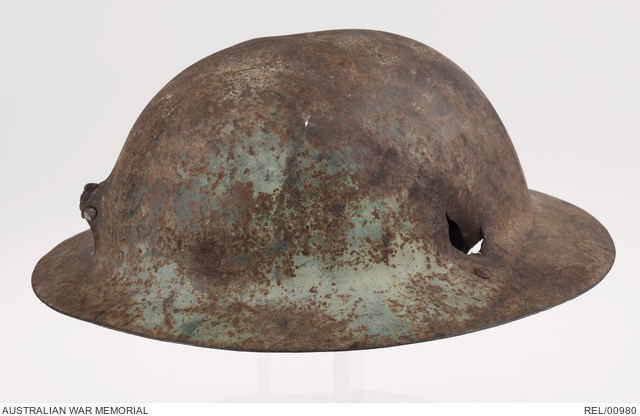 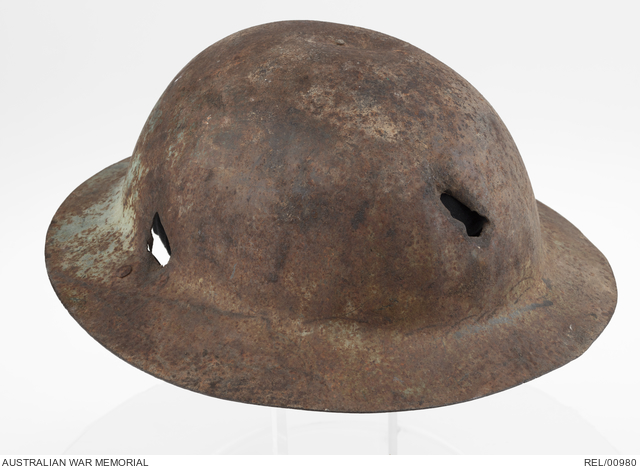 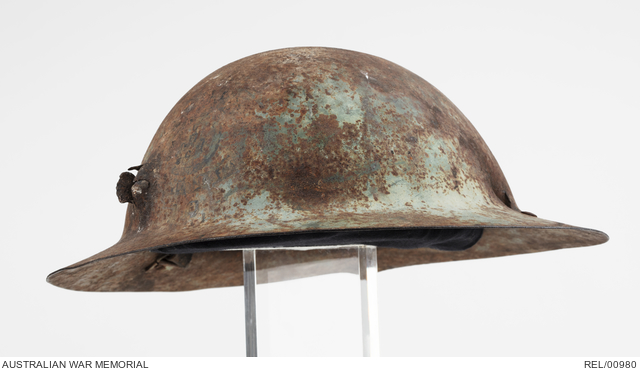 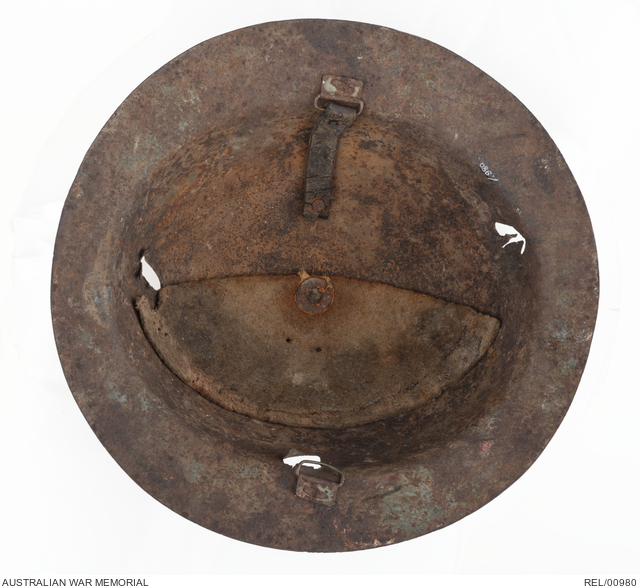 Early British 'War Office Pattern special 1mm steel' helmet. On the front of the dome is a faded painted regimental badge, possibly for the 10th Inniskilling Fusiliers. There are two shrapnel or bullet entry holes, one in the rear of the helmet, the other on the right. There is one exit hole beside the painted badge on the front. The surface of the helmet is lightly corroded and shows only a little of its original green paint finish. Half of the original felt helmet liner remains, together with a short section of leather chin strap attached to a rectangular wire loop which was originally fixed to the helmet with a split-pin.

Although this steel helmet was once worn by a British soldier it was found on the remains of a dead Australian at the site of the battle of Fromelles. It was collected by members of the Australian War Records Section on the 27 November 1918, just after the end of the First World War, in the sector in which the 15th Brigade had attacked during the battle.

The 5th Australian Division which attacked Fromelles, included the 15th Brigade, made up of the 57th, 58th, 59th and 60th infantry battalions. The 57th was allocated a supporting role and suffered relatively light casualties during the battle compared with its sister battalions. As a result the battalion carried the burden of holding the line in ensuing days after the battle.

The 58th had the dual role of providing carrying parties and a reserve force. The reserve force (about half the battalion) was ordered to attack late in the battle and was almost annihilated by German machine-gun fire; as a whole, the 58th suffered casualties equal to almost a third of its strength.

Attacking in the first wave, the 59th also suffered heavy casualties at the hands of German machine-gunners, and its advance faltered far short of its objective.

The battle of Fromelles was a disaster for the 60th battalion. In a single day, it was virtually wiped out, suffering 757 casualties. These losses meant the battalion saw little further offensive action in 1916.

Despite its heavy losses, the 5th Division continued to man the front in the Fromelles sector for a further two months.