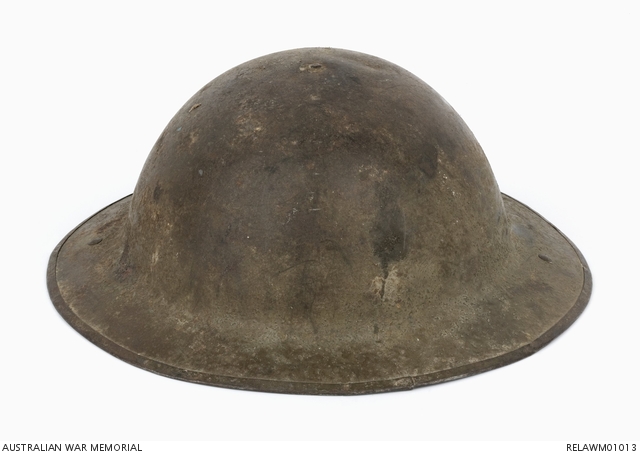 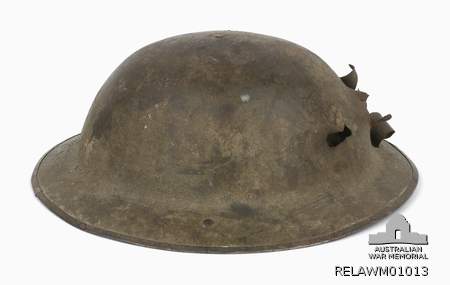 The padded cage inside the helmet is constructed of layers starting at the inside: internal surface of back rubberised fabric, open weave cotton, stiff hessian, short pieces of rubber tubing and then a brown rubber coated cotton fabric. A cotton net and piece of brown felt is secured to the upper outer section of the cage, the net is drawn with a piece of cotton string loosely knotted at the back. Most of the layers are machine stitched together with cotton thread.

Steel helmet worn by 6423 Private William Charles Harding. Harding was wearing this helmet when he advanced behind a machine-gun barrage with the 18th Battalion towards a section of the Beaurevoir Line, between Tincourt and Estrees, on 3 October 1918. A bullet penetrated the helmet but did not knock it off his head. Beyond momentary shock, he experienced no ill effects.

Harding was born in Lucknow, near Orange in New South Wales. He was 22 years of age when he enlisted on 28 July 2016. On 11 November 1916, he embarked from Sydney per Suevi, before proceeding overseas to France on 3 May 1917. He served in France until his return to Australia per Miltiades on 19 June 1919.

The Brodie helmet, called Helmet, Steel, Mark I in Britain and the M1917 Helmet in the U.S., is a steel combat helmet designed and patented in 1915 by Englishman John Leopold Brodie. The original design, a version of the "War Office Pattern Helmet", was made of mild steel. The dome of the helmet was a little narrower and slighty flattened on top than the later versions. The main difference, however, was the brim. It was wider and more sloping, measuring approximately 40mm at the front and rear and 50mm at each side. The helmet measurede 295mm from side to side and 317mm from front to rear. The second version, the "1st Pattern Brodie Helmet" had a more pronounced dome with steeper sides, giving it a more rounded appearance. The brim was considerable smaller than the original design and the helmet shells appear to have not been manufactured uniformly.

The original paint scheme was a mottled light green, blue, and orange camouflage, however they were also painted inside and out in colours varying from a bright apple green to a dull blue-grey. By February 1916, the predominant colour used was a dull green. Many helmets were re-painted during the First World War because the early paint finishes were found to be reflective.

The Brodie helmet reduced casualties, however during the testing at the beginning of March 1916 in battle, a number of problems were identified:
- The helmet was too round and shallow, which meant that it was difficult to keep in place, depsite the chinstrap.
- The liner was hot and slippery.
- The edge of the helmet was sharp, causing injury.
- The paint finish was shiny and reflected light.
- The helmet was made in only one sixe. Suggestion was given to manufacture it in three sizes.

The Mark 1 model helmet of 1916 had a separate folded rim, a two-part liner and matte khaki paint finished with sand, sawdust, or crushed cork to give a dull, non-reflective appearance. In 1917, the liner was modified to include a rubber cushion to make it more comfortable, although this was not adopted for the M1917.