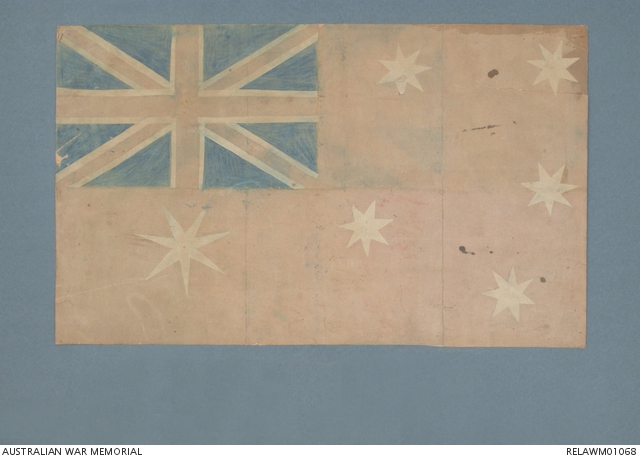 Improvised Australian flag made from reddish brown cardboard, giving a 'red' Australian ensign effect to the 'flag'. The stars, each with seven points, have been cut from paper and pasted onto the cardboard, as have the white stripes of the Union Jack. The blue sections of the Union Jack have been coloured in using blue indelible pencil. The 'red' sections of the Jack are formed from the uncoloured cardboard. A layer of medical gauze appears to have been glued over the entire flag, possibly to keep the paper in place, and later removed, leaving a starch adhesive imprint of the gauze on the upper surface of the cardboard and paper.

Made by the staff of 7 Infantry Brigade Headquarters on the occassion of Prime Minister W M Hughes' visit Australian troops in France on 2 July 1918. However, the unit was in the line, preparing for the Battle of Hamel and so the visit did not take place.