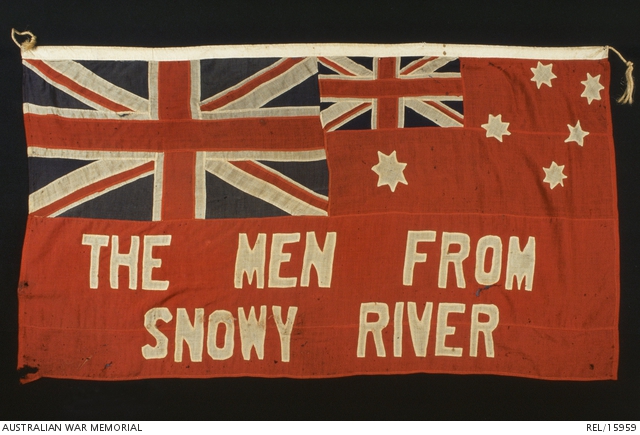 'Men from Snowy River' recruiting banner. The banner is made from a large British red ensign hanging from a horizontal hoist, with a smaller Australian red ensign sewn next to the union jack in the upper proper left corner. Beneath these the text 'THE MEN FROM SNOWY RIVER' is appliqued in white fabric.

A recruitment method that enjoyed popularity during the First World War was the 'snowball' recruiting march. Beginning with a small group of men, a march would follow a chosen route, usually through rural communities, finishing at a town or city with a training camp. At each town or community visited civic receptions and recruitment meetings would be held to welcome the marching volunteers and encourage local men to enlist, and so the march would 'snowball' in size.

After the publicity from the first recruitment march by the 'Gilgandra Coo-ees' in October 1915, several other marches took place in December 1915 and January 1916. One of these was 'The Men From Snowy River' march from Delegate, near the New South Wales / Victorian border, to the training camp at Goulburn, New South Wales. On Thursday 6 January 1916 a large crowd saw off the first fourteen volunteers in front of the Delegate School of Arts. The volunteers were presented with this banner to carry during the march. The volunteers marched 23 miles to Bombala, arriving on Saturday evening. On the way they camped at Craigie and Mila, both small rural communities. At Bombala the volunteers were met by local dignitaries. There were recruitment meetings and a church parade and several men enlisted. The marchers stayed at Bombala for three nights, camping at the showground before departing on 11 January with a total of 22 volunteers. That same day the march arrived at Bibbenluke. The local school children, led by their teacher, Les Allen, left the village to meet them. The children formed up behind the recruits and marched with them into Bibbenluke. Six men volunteered in Bibbenluke and Les Allen himself enlisted later that day at Holts Flat, where the marchers camped overnight. The marchers then made their way to Cooma, via Nimmitabel, Summer Hill and Rocks Flat. At Nimmitabel the call for recruits resulted in 30 men volunteering, including Ernie Corey, who would later be awarded the military medal four times for bravery as a stretcher bearer. The marchers arrived at Cooma on 15 January where a further 40 men volunteered, bringing the total to 100. The march left Cooma for Queanbeyan on 17 January, which was reached on 22 January. After two nights in Queanbeyan the march headed towards its final destination, Goulburn. After 23 days of marching the recruits reached Goulburn on 29 January 1916 with 144 volunteers.

The enlistment figures for snowball marches tended to be low considering the amount of effort that went into organising them and they soon fell out of favour. An effort was made to revive them in 1918 to boost falling enlistment numbers, when a series of 'Freedom' marches were held, but they were largely unsuccessful. However, the marches were not forgotten and a second 'Men From Snowy River' march took place during the Second World War.

On 6 July 1940, 15 volunteers set off from Delegate to recreate the first recruitment march, using the original banner from the First World War march. The second march generally followed the route of the original, although it diverted to the developing National Capital, Canberra. This march was completed in a much faster time than the original, with the volunteers travelling by car or truck between towns and only marching through the towns. This meant that the entire 1940 'march' took only five days. The final tally of recruits raised from this march was approximately 108 men. As part of the Australian bicentenary celebrations in 1988 a reenactment of the two marches took place, using the banner once more. It began in Delegate on 18 April and ended in Goulburn on 21 April. The marches were commemorated again in January 2006 on the 90th anniversary of the first march, with a reenactment of the march and a civic reception at the hall at Delegate, although the banner was not carried, being now part of the national collection held by the Australian War Memorial.