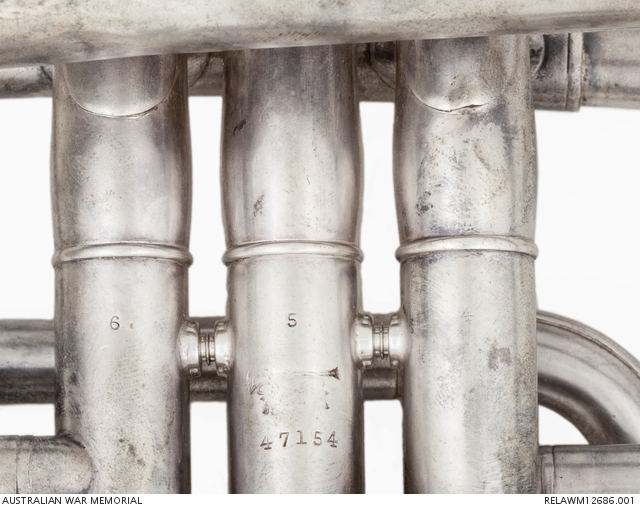 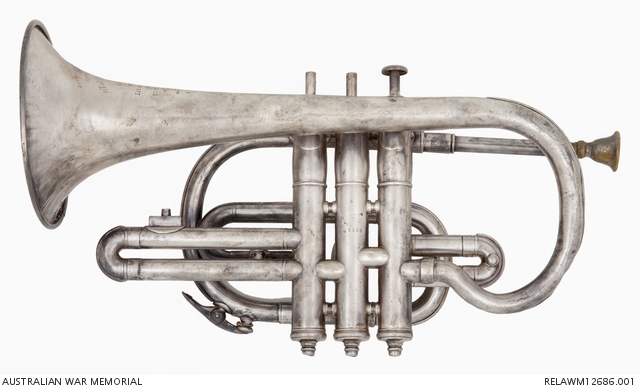 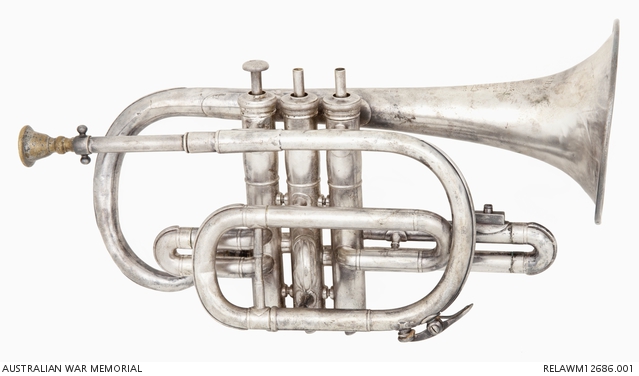 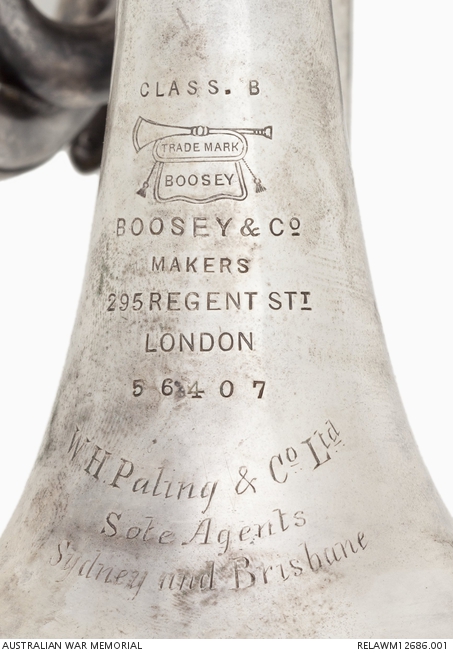 Silver plated brass cornet with standard 'shepherd's crook' bend leading from the bell tube to the first valve. The bell is impressed 'CLASS B / [BOOSEY TRADEMARK] / BOOSEY & CO / MAKERS / 295 REGENT STT / LONDON / 56407'. Engraved directly under this is 'W H Paling & Co Ltd / Sole Agents / Sydney and Brisbane'. The central piston valve is marked with the Boosey trademark and bears the serial number '47154'. The mouthpiece attached to the long leadpipe is marked 'Czechoslovakia' on the friction sleeve, while the lower tube leading from the leadpipe is fitted with a watervalve. The valve finger pads are missing for valves two and three. There is some minor denting to the tubing at the bend of the shepherd's crook, and some rippling to the bell flare, associated with a soldered repair to the lower bell and seam. The key button is missing.

Cornet played by Bandmaster 535 Sapper William John Headen during the sinking of the troop transport HMAT Ballarat on Anzac Day 1917.

Headen, a fitter of St Kilda, Victoria, enlisted on 5 January 1917 aged 29 years 8 months. He was assigned to 2 Section, Railway Unit and embarked for overseas service aboard the transport HMAT Ballarat. After the sinking of the Ballarat, and landing in England, he was transferred to 15 Light Railway Operating Company and joined his unit in France on 30 May. In August he was admitted to hospital for a medical condition and played no further part in the war. He returned to Australia aboard the transport Port Darwin, being discharged on the ground of debility on 8 April 1918.

The Ballarat was a P&O liner of 11,120 tons which left Melbourne on 19 February 1917 for England with some 1600 troops aboard. These troops included members of the 15th (Victorian) Railway Operating Company; the 7th Reinforcements for 9,10 and 11 Machine Gun Companies; the 24th Reinforcements for 5,6,7,8 and 14 Battalions; the 7th Reinforcements for 37, 38 and 39 Battalions; the 10th Reinforcements for 4 Machine Gun Company and about 200 crew. Ballarat joined a convoy at Cape Town and left with the first group of faster ships for England, escorted by an auxiliary cruiser. On 24 April, this cruiser was replaced by destroyers and each transport then made an individual run for port in England, each escorted by a destroyer. The Ballarat was paired with HM Torpedo Boat Destroyer (TBD) Phoenix. At 2.00 pm the following day - ANZAC Day - a torpedo was spotted and despite Ballarat's evasive action, it struck one of the propellers and holed the aft of the ship.

The ship slowly settled by the stern but took close to four hours to sink - an attempt was made by the Chief Engineer and members of the AIF Railway Unit to restart the engines to move the ship closer to land, but rising water forced them back. Bugler Warwick sounded the alarm and men assembled in a calm fashion before the 'Advance to Boats' was blown. The ship was abandoned with hospital patients going first. There was no panic, despite the attacking submarine's periscope briefly breaking water in the midst of the lifeboats. No lives were lost and the entire reinforcement was rescued by TBD Phoenix, Lookout and Hardy and the trawlers City of Edinburgh and Foss, which landed the men at Devonport.

The band's instruments remained in the hold and were lost, with the exception of Sapper William Headen's cornet. As the boats filled and cast off from the ship, Headen 'livened things up a bit' by playing a range of tunes on his cornet, including 'Australia Will be There' and 'The Long Trail'. The tune that later stuck in everyone's mind was 'So Long Letty', a popular number of the period, to which the men sang along.

Such was the popularity of Headen's playing that he entertained members of the Ballarat Survivor's organisation every ANZAC Day throughout the 1920s and 1930s at their annual reunion. Despite promising to donate it to the Australian War Memorial in 1925, he found it difficult to part with, writing in 1936 'I prize it more than I can express'. Headen played his last tunes, including the Last Post, for the Ballarat survivors on Anzac Day 1937. With mixed feelings, he donated the cornet just before Christmas that year. He died on 5 July 1968.

The cornet's serial number indicates a manufacturing date of approximately 1900. The Czech-made mouthpiece is a replacement.