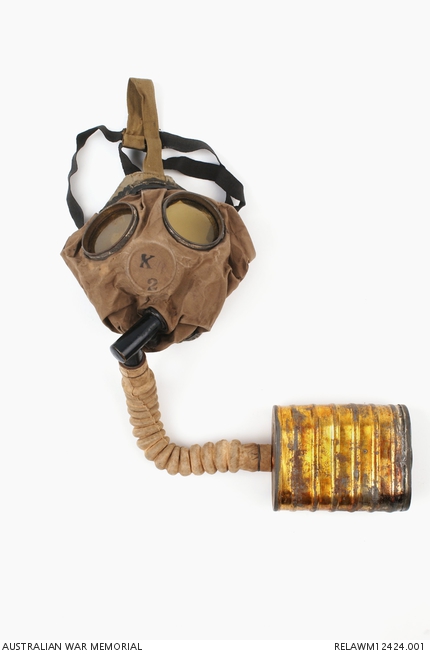 British Small Box Respirator consisting of a rubberised fabric face mask, connected by a fabric covered rubber hose to a chemical absorbent canister made of tin plate. The face mask is made of light weight khaki cotton fabric, coated internally with a thin layer of black rubber. The number '2129257' is written in blue ink on the right hand cheek, near the edge of the mask. A single khaki cotton tape from the middle of the forehead connects to a pair of black elastic straps from each cheek, ensuring a tight fit on the wearer's face. The circular eyepieces are made of clear celluloid set in metal rims, which are sealed into the mask using white cotton binding coated with rubber sealant. Between the eyepieces inside the mask is the nose clip, which consists of a circular wire spring with rubber covered jaws wrapped in gauze. Externally, the wire of the nose clip is visible as a circular outline below the eyes containing a large stamped size marking reading 'K 2'. This clip may be squeezed to adjust the position of the nose pieces without removing the mask. The internal mouthpiece is of black rubber, with a flange to fit between the teeth and lips. It connects to a black painted brass tube with a right angle join from which the rubber hose extends to the canister. The letters 'J.J.B.' are impressed into the sealed end of the tube. Behind the right angle join for the hose is the stub of the exhale valve. This valve, which would have been a black rubber sleeve, has perished and snapped off, leaving only a small fragment attached to the stub. The flexible 27 cm corrugated rubber hose connecting the mask to the canister is covered with a pale coloured stockinette fabric, which is vulcanised to the rubber for strength. The hose is secured to the mask and canister by twisted wires with fabric tape covering the sharp ends. The tin canister has an overall golden/orange finish and soldered seams. It is oval shaped in section, with a circular inlet valve set into its base.

This respirator is associated with the service of Lieutenant Edmund Clegg Dockar, who served with 43 Infantry Battalion ('The Cameron Highlanders of Canada') of the Canadian Expeditionary Force during the First World War. It was also used by 2129257 Private Harvey McIntosh, CEF, and has his service number written on the mask.

The Small Box Respirator was introduced into service with British and Imperial forces on the Western Front in 1916. It was produced following a concerted effort by authorities in the UK to provide its soldiers with an effective gas mask to replace the inefficient P and PH Helmets. The Small Box Respirator ('SBR') proved to be the most effective gas mask produced during the First World War, and had a number of advantages over its French and German contemporaries. The provision of a nose clip and internal mouth piece for the wearer meant that the mask itself did not have to be closely fitted to the contours of the face. In the absence of lachrymatory or vesicant gasses, it was in fact possible to use the mask without having the eyepieces on, thus allowing unobstructed vision. The exhaust valve meant that only inhaled air had to pass through the canister, in contrast to other respirators in which both indrawn and exhaled air passed through, hugely increasing the amount of moisture retained, and shortening the canister's effective life. The canister underwent continuous development, and by 1918 contained a mixture of wood charcoal and soda lime (proportioned 3:2) in layers separated by cotton pads and screens of mesh in several gauges, which prevented larger particles from being ingested through the mouthpiece. This canister proved highly effective against the German gasses then in use. The disadvantages of the SBR lay in its flexible hose, which was vulnerable to damage, and in the extreme discomfort caused by extended wear of the nose clip. The eyepieces were prone to fogging or misting, a failing common to most respirators of the period.