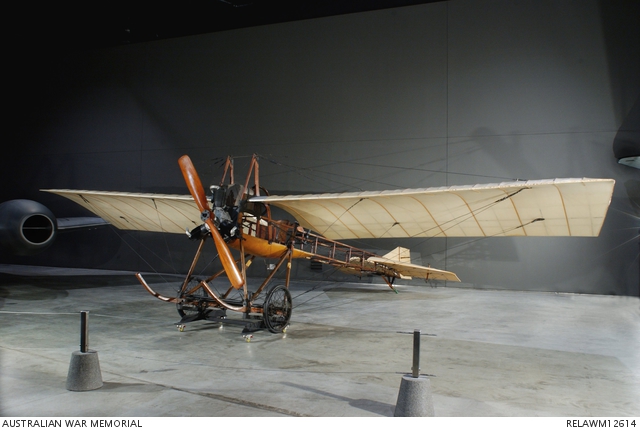 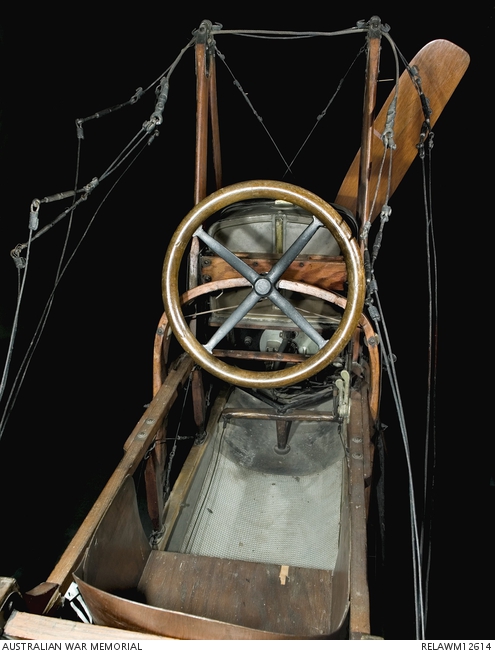 Deperdussin taxi-type single seat training monoplane with 35hp Anzani Y-type three cylinder engine radial. Its serial number is CFS.5. The fabric has been replaced but most other parts are original.

In the early days of flying in France, Armand Deperdussin and his aircraft designer, M. Bechereau, formed the Societe Pour Appareils Deperdussin, and designed and produced Deperdussin monoplanes of advanced design for the period. In 1912, the Australian Government ordered from the British Deperdussin Aeroplane Company, two single-seat trainers, Type A with 35hp Anzani Y-type three cylinder engine. These two aircraft were in the first batch of four aircraft ordered by the Commonwealth Government (the other two aircraft were BE-type biplanes). The recorded cost of the Deperdussin was 480 pounds each.

One Deperdussin was purchased as a School-Type for flying training, and the other (this example) as a Taxi-Type for ground training. The two Deperdussins were delivered to Farnborough for trials, and on 22 February 1913 the Taxi-Type was ground tested by a Mr Brock, mention being made that it 'only flew on short flights to and from the Plain'. The Taxi-Type was accepted by an Australian representative on 5/3/1913, after satisfactory tests by Mr Brock. Its purchase price was 450 pounds. The Deperdussins were shipped to Sydney on SS Demosthenes and arrived on 28 May, 1913. On 29 July they were transferred to Melbourne. CFS.5 Deperdussin was the "Taxi-Type" used for engine-starting practice, rigging instruction and for taxi training at Central Flying School, Point Cook. However it did fly on unofficial "hops" by trainees. The first flying training course at Point Cook commenced on 17th August 1914. The School's instructors were Lieutenant Henry A Petre, and Lieutenant Eric Harrison. Petre was an Englishman, who learnt to fly at Brooklands, and had previously been a flying instructor with the British Deperdussin Company. A solicitor by profession, he was chosen by Sir george Reid, then High Commissioner in London. His acceptance of the Department of Defence appointment made him Australia's first military aviator. He later rose to the rank of Major, and was awarded the DSO and MC. Lieutenant Eric Harrison, a Victorian from Castlemaine, had worked for Bristol, and had qualified as a pilot in August 1911. The four trainees on the 1st course were: Lt Richard Williams, 24 of Moonta, South Australia, (later Air Marshal Sir Richard Williams, first Chief of the Air Staff, RAAF, and Director-General of Civil Aviation); Capt T W White, 26 (later Sir Thomas White, member of several Commonwealth Cabinets, and Australian High Commissioner in London); Lt D Manwell, 24, a former Victorian businessman; and Lt G R Merz, 22 a medical graduate and an officer of Melbourne University Rifles. Merz was later killed in Mesopotamia on 30 July 1915, as a member of the AFC "Half Flight" sent to Mesopotamia. He was the first Australian pilot killed in action.

The serial number CFS 5 identifies this arcraft as the 5th Australian Military aircraft. It is the oldest existing Australian aircraft. either military or civilian.