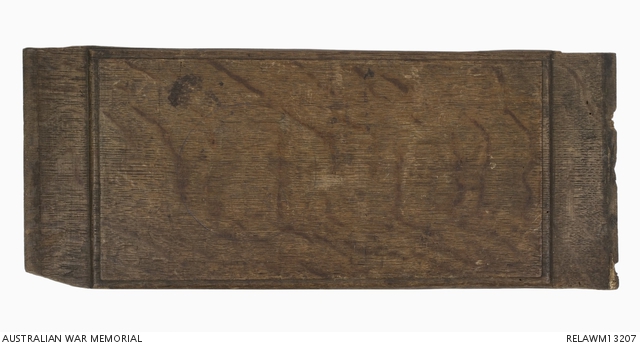 Rectangular cedar panel with simple chamfered edges, forming a central panel, and a pair of rebated ends desiged to slot into a larger fitting. One long edge bears evidence of being broken, suggesting this panel is from a larger piece. The reverse bears some faded chalk marks and a pair of round pencilled design marks.

The building of St Martin's Cathderal (St Maartenskerk in Flemish) at Ypres commenced in 1221, and continued for the next 300 years. German shelling of the town started in late 1914 and by 1917 had reduced the Cathedral to ruins. Wood from the church was salvaged by allied soldiers for use in trenches and roads or burned for warmth during winter. This particular cedar panel was recovered by Captain Henry Alfred Cook, 2 Australian Divisional Train in 1917. Cook, a salesman from Pittwater, NSW, was born at Bega and aged 29 when he enlisted on 20 September 1914. Assigned service number 1012, Driver Cook was attached to 2 Light Horse Brigade Train and embarked for overseas service from Sydney aboard HMAT Port Macquarie on 21 December 1914. He served at Gallipoli (where he 'rendered most excellent service'), was quickly promoted through the ranks and later transferred to 2 Australian Divisional Train upon arrival in France in 1916. He was mentioned in dispatches on 24 September 1916 for 'consistent devotion to duty on Tramway duty at the Somme in July and August', where, as a Lieutenant, he was in charge of hauling supplies to Gordon Dump and Chalk Pit under constant shell and gas fire. At Flers on 13 November 1916 Lieutenant Cook's action in organising the repair of a 75 yard gap in the Tramway line won him the Military Cross; the citation discloses that Cook's party worked constantly from 9 to 21 November bringing supplies up to 5 and 6 Infantry Battalions and endured losing an average of 10 casualties a day in that period. Cook returned to Australia on 24 January 1919 and later establshed Motor Tractors Pty Ltd, a machinery importing business which secured the sole import rights in NSW to the Fordson tractor range.