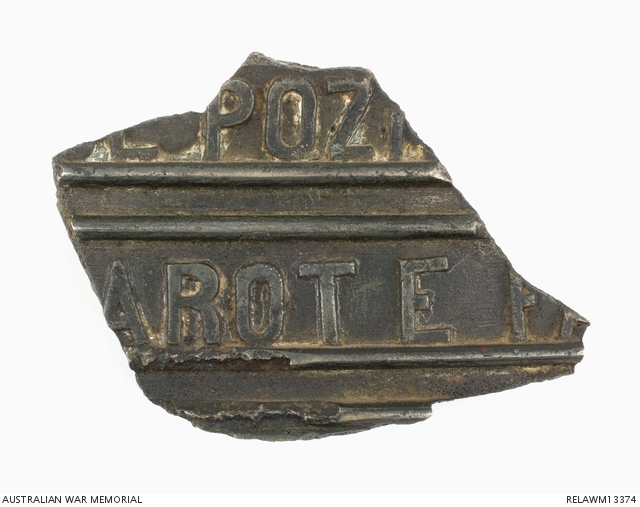 Bell fragment from Pozieres Church. Cast into the outer face of the fragment are the raised letters 'POZI' and 'AROT E'. Underneath the letters are two horizontal lines.

Pozieres, a small village in the Somme valley in France, was the scene of bitter and costly fighting for Australian troops in mid 1916. The village was captured initially by the 1st Division on 23 July 1916, with further attacks made in the area by the 2nd and 4th Divisions. Over a period of 42 days the Australians made 19 attacks, 16 of them at night. The final casualties totalled a staggering 23,000 men, of whom 6,800 were killed. The village was demolished by the almost constant barrage of artillery fire.

This fragment of bell was collected from the ruins of Pozieres Church by James (Jim) Alfred Bolton who was serving with 2 Field Company Engineers, 1 Australian Division. Bolton was born in St Kilda, Victoria in 1888. A 26 year old engineer, he enlisted as a sapper with 2 Field Company Engineers on 25 August 1914 and was assigned the service number 170. He embarked from Melbourne on 21 October aboard HMAT Orvieto which was part of the first convoy of ships taking Australian and New Zealand troops to the war. On 9 November the convoy intercepted a wireless message from the British radio station on the Cocos (Keeling) Islands reporting the approach of an unknown vessel. One of the convoy escorts, light cruiser HMAS Sydney, was sent to investigate and encountered the German raider SMS Emden which had attacked 30 allied vessels in the Indian Ocean.

In the engagement that followed Sydney sustained some early damage and casualties but her superior firepower eventually resulted in Emden's defeat. Arriving at Colombo on 15 November Orvieto took on board 40 German prisoners from SMS Emden who were kept under armed guard. While guarding the prisoners in Suez, Bolton was injured when a fellow guard accidentally discharged his rifle. The bullet struck a girder above his head and fragments of metal hit him in several places. After a period of training in Egypt, Bolton went on to serve at Gallipoli. He contracted influenza and dysentery and was evacuated to Egypt for treatment in September 1915.

On 9 March 1916 Bolton was promoted to corporal and embarked for service on the Western Front a few weeks later. In August he transferred to 3 Field Company Engineers, was commissioned second lieutenant and later promoted to lieutenant in November. Bolton spent a few weeks in England on leave before returning to France where he was detached from his unit to serve with a number of British engineering units. On 26 October 1917 Bolton was wounded in action and evacuated to England for treatment suffering from a severe gunshot wound to the buttocks. After recovering he again returned to France in February 1918. Bolton returned to Australia in December and was discharged on 16 February 1919.