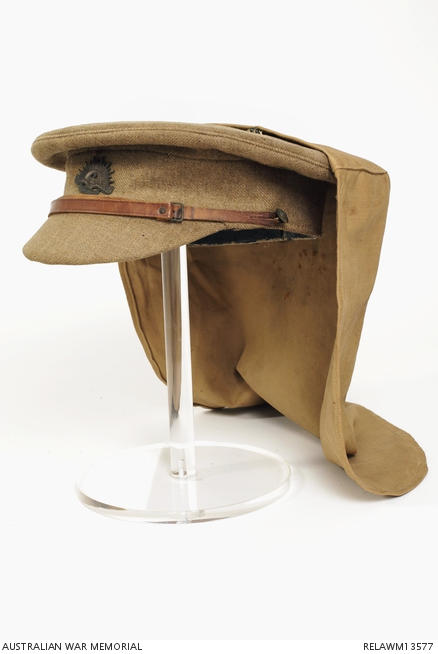 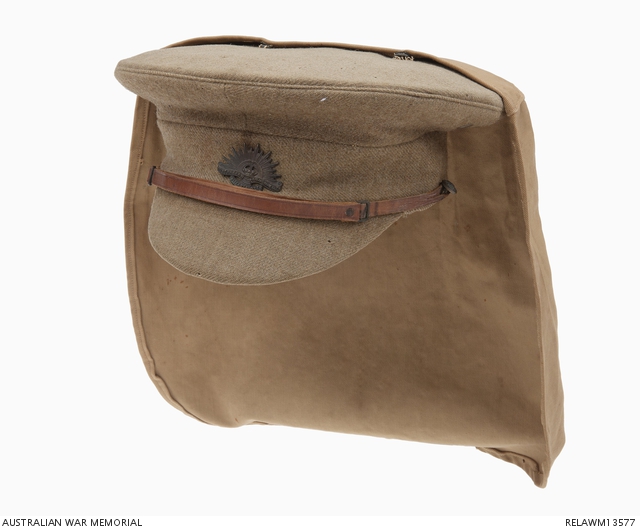 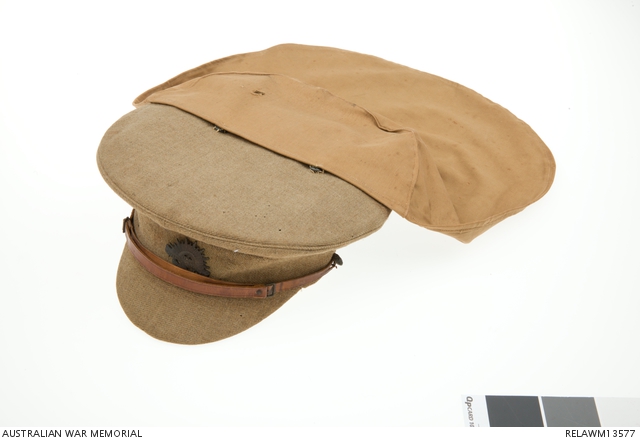 Australian Army Other Ranks khaki woollen peaked cap with black leatherette(?) lining. A khaki cotton drill sun cape is attached to the top of the cap with two press studs. It covers the back half of the crown of the cap and then hangs 330mm down the back to protect the wearer's neck. The Australian Army general service hat/collar badge is oxidised brass. A brown leather chinstrap and British Army general service buttons are fitted above the peak, which is stiffened on the underside with leather or board. There are a pair of khaki eyelets in both sides of the cap. A bullet has passed through the cap. It entered just below and in front of the eyelets on the right side and exited near the back of the right rear quarter of the top of the cap.

Worn by 963 Private Charles Robert Duke at Gallipoli in 1915. Duke was born in Dunedin, New Zealand. He served with the cadets in New Zealand before coming to Australia in about 1912. He was working as an architect when he enlisted in the AIF on 2 September 1914.

He embarked for overseas service with 4 Battalion on 20 October 1914 and was issued with this cap before the landings at Gallipoli on 25 April 1915. He slightly sprained his ankle early in the campaign and was evacuated to Egypt, returning to duty on Gallipoli on 19 May 1915.

He was wounded in the face on 28 May 1915 and was evacuated again to Egypt, returning to Gallipoli at the beginning of August. On the second day of the battle of Lone Pine he was wounded by bullet splinters that struck him in the face and knocked him back from the parapet. As he fell backwards another bullet grazed the right side of his head and passed through the cap. He was evacuated to Malta and then to England.

He rejoined his unit in Egypt in March 1916 where he was transferred to the 5th Pioneers and promoted to second lieutenant a few weeks later. Duke served on the Western Front and was promoted to lieutenant and later temporary captain. He was Mentioned in Despatches in 1917 and was awarded the Military Cross in 1919 for his actions at Templeux in October 1918.

Duke returned to New Zealand after the war with his wife, former Australian Staff Nurse Marjorie Grace Little, who he married in January 1918.