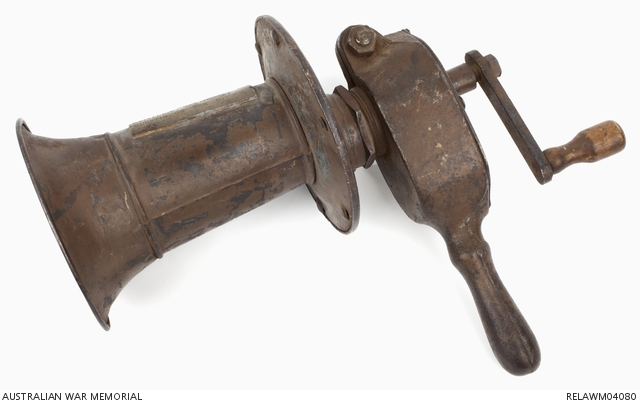 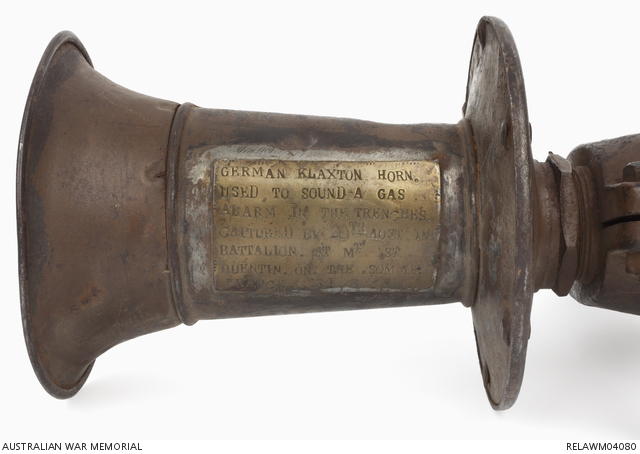 Hand cranked, hand-held horn klaxon, comprising a cast steel cranking unit with an integral handle. Emerging from the rear is a rotating crank bar fitted with a shaped wooden handle. This unit is bolted to a wide, rivetted circular tin diaphram housing. A thin steel diaphragm is held within this unit, and an attached tubular tin horn amplifies the sound. Soldered to the upper face of the horn is a brass plaque with the following impressed into the surface: 'German klaxon horn used to sound a gas alarm in the trenches. Captured by 20th Aust Inf Battalion at Mt St Quentin on the Somme, France 31.8.18'. The surface of the horn under this plaque has been roughened to allow the solder to key to the tin. The whole unit is painted brown. Turning the handle anticlockwise produces a regular and sharp clacking sound, amplified by the diaphram and horn.

This gas alarm klaxon forms part of a collection of enemy equipment captured by 20th Battalion, AIF on 31 August 1918 as a result of their (and other battalion's) successful and rapid assault towards Mont St Quentin. As part of 5th Brigade, 20th Battalion had approached from the northwest via a crossing of the Somme River at Feuilleres, once the town of Clery had been neutralised, and at dawn on 30 August, assembled and attacked from a point just east of Clery, with 17 and 19 Battalions on their right flank. Their task was to 'seize the line of the road down the northern slope to Feuillaucourt bridge at the bottom' (Bean, Vol VI p 805). This northwest flank formed the main preparations for the attack on Mont St Quentin. The depleted battalion (only 300 strong including 50 headquarters staff) attacked towards a spur (known as the 1916 knoll), thrusting through Eleu Alley, dispersing the defenders (80th German Infantry Regiment) and consolidating their positions. They secured the knoll and waited to renew the attack the next morning, 31 August, at 5 am, with 17 Battalion on their right. As an artillery barrage on Gottlieb Trench ahead pounded German positions, the 20th started bombing up German trenches (Nich Trench, Morava Trench and Oflant Alley), surprising the defenders who were either captured, killed or ran away. Reaching Gottlieb Trench, they waited for the bombardment to cease before entering the town.

The town was infiltrated by the Germans later that day but a renewed assault on the heights secured Mont St Quentin on 1 September.

This klaxon appears to have been captured from one of the forenamed trenches during the assault on the town.

The captured material was handed over to the Australian War Records Section on 16 September 1918 at Frise, during the Divisional Sports Day, and, apart from the klaxon, included a trench stretcher, a collection of rifles, a machine gun base and ammunition boxes, a pioneer saw, and a collection of 4.5 inch and 5.9 inch shell charge cases.