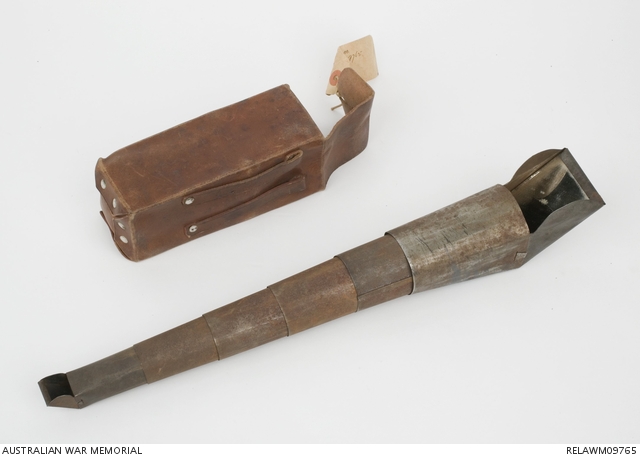 Collapsible trench periscope in leather case. The body of the periscope is made from a series of six telescopic metal rings which can be extended for use, or collapsed for storage. At the top of the periscope is a rectangular mirror on a downward facing angle, however the smaller mirror at the bottom of the periscope is missing.
The brown leather case has silver stud fittings with two belt loops affixed to the back for attachment to a Sam Browne belt. The case is enclosed by a single tab and stud. Tied to the case is an accessioning label with the handwritten number '9765'.

On Gallipoli periscopes provided a much safer way of observing the enemy from the trenches. They allowed a soldier to monitor the Turks without having to look over the parapet, thereby revealing himself to enemy snipers. This particular example was used by by Herbert Crowle.

Herbert Crowle was born in North Carlton, Victoria on 29 February 1884. A resident of Glen Ormond, South Australia, he enlisted on 12 December 1914 aged 30. Assigned to 10 Battalion Reinforcements, Crowle embarked for Egypt on 19 February 1915 aboard the transport ship Runic. He joined 10 Battalion at Gallipoli on 7 May but less than two weeks later, suffered a blast injury to his left eye which necessitated evacuation to 1 Australian Casualty Clearing Station. Crowle rejoined his unit at the end of May and remained on the peninsula until its evacuation in December.
Redeployed to the Western Front Crowle arrived in France on 3 April 1916. Ten Battalion’s first major action was at Pozieres in the Somme Valley from 22 to 25 July. They then relieved 3 Battalion at Mouquet farm on 19 August. Two days later Crowle was wounded in action. He died from his wounds at 3 Casualty Clearing Station on 25 August 1916.
On the night before he died Crowle wrote a letter home to his wife Beatrice. He wrote ‘I was hit running out to see the other officer who was with me but badly wounded. I ran too far as I was in a hurry and he had passed word down to return. I got two machine gun bullets in the thigh, another glanced off my water bottle and another by the periscope I had in my pocket. The Stretcher Bearers could not get the wounded out any way than over the top and across the open. They had to carry me four miles with a man waving a Red Cross flag in front and the Germans did not open fire on us. It is no use trying to hide things. I am in terrible agony...gas gangrene has set in and it smells rotten. ... they have taken pounds of flesh out of my buttock my word they look after us well here. I am sorry dear, but still you will be well provided for - I am easy on that score.'

Crowle was buried at Puchervillers Military Cemetery. In a letter to Beatrice, the Reverend A H Broughton wrote 'He wrote this letter the evening before he died. As he could not address it, I enclose it in my letter. I buried him the next day in the Soldier's Cemetery here and a wooden cross has been erected over his grave with an inscription.'

This periscope was returned to Beatrice in May 1917 amongst a collection of Crowle’s personal effects.