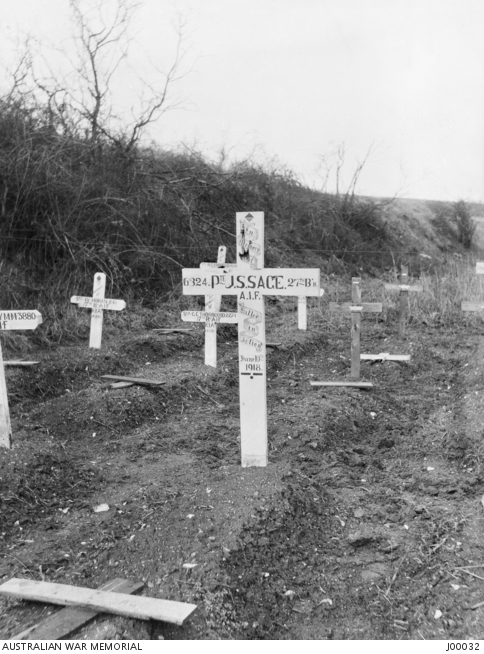 The grave of 6324 Private (Pte) John Saddington Sage, 27th Battalion, of Port Lincoln, SA, killed in action (KIA) at Morlancourt Court 8 August 1918, in Villers-Bretonneux Military Cemetery. Left to right is the grave of 3880 Pte Andrew James McCaffrey MM, 17th Battalion, of Coffs Harbour, NSW, KIA 27 May 1918; 241 Sergeant William Joseph Hoban, 17th Battalion, of Hastings, Vic, date of death 13 May 1918; 2274 Sgt George Eyre Thorogood, 17th Battalion, of Wagga Wagga, NSW, KIA 14 May 1918; 6396 Pte Norman Conrad Maynard, 17th Battalion, of Randwick, NSW, KIA 15 May 1918. This image is one of a set of photographs of the original graves of some members of the 27th Battalion. The Battalion funded the purchase of the camera through its adjutant Captain (Capt) Southon for 5541 Pte G R Barrington to photograph the graves. The camera and negatives were then acquired by Major John L Treloar on behalf of the Australian War Museum, reimbursing costs for the camera to Capt Southon.
One of a set of 66 images requested by Lieutenant Colonel Frederick Royden Chalmers. The 27th Battalion history 'The Blue and Brown Diamond' relates that 4210 Henry Matthew Skinner MM and battalion photographer Barrington left Mont-sur-Marchienne on 2 February 1919 to photograph scattered graves of soldiers of the unit. Skinner features in a number of the images photographed by Barrington. Copies were supplied to next of kin and near relations.