General William Bridges and his staff watching the manoeuvres of the 1st Australian Division in the desert in Egypt, March 1915 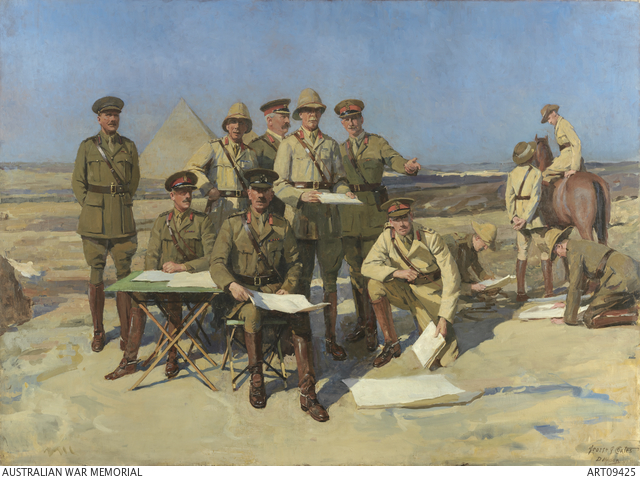 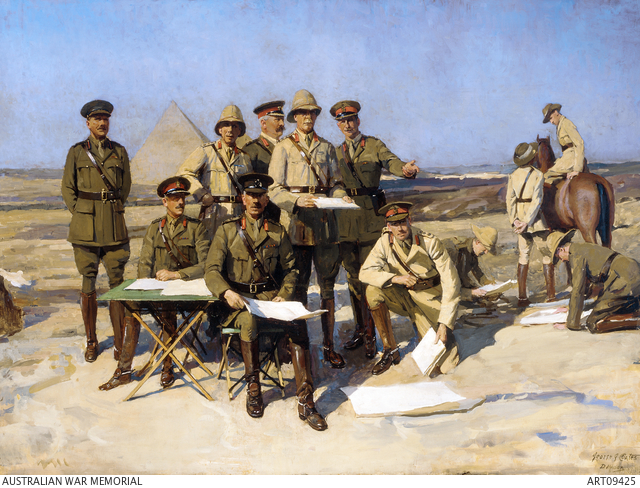 Depicts a group portrait of officers of the Australian Imperial Force, 1st Australian Division in the desert in 1916, some standing and some seated at tables. Standing l-r: Colonel N R Howse VC, Colonel J J Hobbs, Colonel W G Patterson, Colonel J McCay, Colonel E G Sinclair-MacLagan DSO, seated l-r: Colonel C B B White, Major General W T Bridges, CMG, kneeling: Colonel H N MacLaurin, group of four unidentified men at right, one mounted, one standing and two kneeling. The Pyramids of Giza can be seen in the background.
George Coates (1869-1930) studied painting under L. Bernard Hall between 1895-96 acquiring both respect for the painter's craft and the approach of the Munich School. He won a travelling scholarship in 1896 and went to London next year before moving to Paris, where he worked at the Académie Julian and studied under Jean Paul Laurens. In Paris Coates renewed an acquaintance with a fellow art student, Dora Meeson (1869-1955) who later became his wife. Coates and Meeson established themselves in Chelsea, London where they became members of an extensive circle of Australian expatriate artists. Coates established himself as one of London's leading portrait painters, where he lived until returning to Australia in 1921, and his realism and representational style emphasized a harmonious range of low tones, with a detailed and painstaking approach.