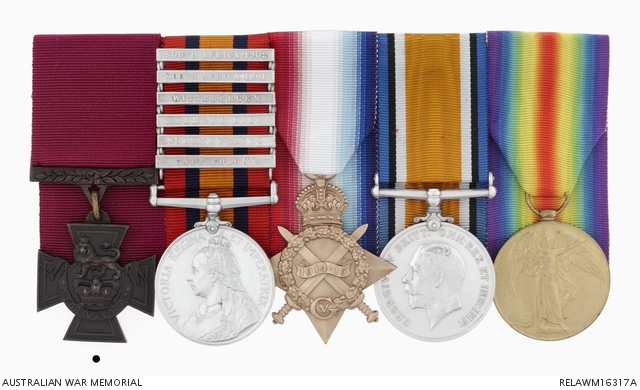 Neville Reginald Howse was born in the village of Stogursy in Somerset, England, on 26 October 1863, one of ten surviving children of Dr Alfred and Lucy Elizabeth (nee Conroy) Howse. Neville was educated at Taunton before studying medicine at London Hospital, graduating as a medical practitioner in 1887. In 1888 he worked as an assistant demonstrator in anatomy at Durham University but resigned a year later due to ill health. He migrated to Australia the same year in the hope that the warmer climate would aid his ‘weak lungs.’

Howse set up a private practice in Taree, NSW, before accepting the position of medical officer at the small Manning River District Hospital. In 1895, he returned to England for post-graduate studies in surgery. Following the completion of his degree in 1899 he returned to Australia and set up practice in Orange. Shortly afterwards he accepted the position of medical officer at Orange Hospital.

In January 1900, responding to a call for troops for the war in South Africa, Howse enlisted in the second contingent of the New South Wales Army Medical Corps as a lieutenant. He embarked in the troop ship ‘Surry’ on 17 January 1900, reaching Capetown on 18 February. Soon after arriving, he contracted typhoid fever and was hospitalised for eight weeks.

In May, during fighting near Doornkop, about 11 kilometres west of Johannesburg, Howse was mentioned in dispatches for his work treating casualties in the field. Two months later he was attached to a mounted infantry column under Brigadier-General Charles Parker Ridley chasing the elusive Boer general, Christiaan de Wet. Near Vredefort, on the morning of 24 July, the rear of de Wet’s column was attacked by a number of Ridley’s troops.

Instead of fleeing, de Wet and his men turned and attacked with such ferocity that the men were twice forced to pull back. When a bugler rose to sound retreat on the second occasion he was wounded in the abdomen. Seeing the bugler fall, Howse grabbed a horse and raced forward through the hail of bullets. He tended to the wounded man but before he could move him from the line of fire the horse was killed. Howse lifted the bugler and carried him to the safety of the rear compound where he performed surgery on the bugler’s perforated bladder.

For his actions at Vredefort, Howse was awarded a Victoria Cross (VC). He remains the only Australian medical officer to receive a VC. The citation for the award reads: ‘During the action at Vredefort on the 24th July, 1900, Captain House (sic) went out under a heavy cross fire and picked up a wounded man, and carried him to place of shelter.’

A Sydney Mail report of the investiture states that not long after the Vredefort action, Howse was briefly taken prisoner by the Boers but was released as a non-combatant. He was promoted to captain on 15 October 1900 and returned to Australia in February 1901. The Lieutenant Governor and Chief Justice of NSW, Sir Frederick Darley, presented Howse with his VC at Victoria Barracks in Sydney on 4 December. He returned to South Africa for a brief period in 1902 as senior officer in command of the bearer company.

During the years between the Boer War and the First World War, Howse was attached to the 3rd Australian Infantry Regiment, holding the rank of captain in the Australian Army Medical Reserve. He married Evelyn Northcote Pilcher at Bathurst on 31 January 1905. There were five children from the union. Prior to the outbreak of war in 1914, he was elected Mayor of Orange.

In August 1914, Howse was asked to join the impending war effort. On 14 August, at 50 years and 9 months of age, he enlisted in the AIF Army Medical Corps (AMC) as a lieutenant colonel. He was given command of a small medical unit accompanying the Australian Naval and Military Expedition Force (AN&MEF) to New Guinea. The contingent embarked on HMAS Berrima, a converted P & O liner, on 19 August.

On 11 September, during the first action of the AN&MEF at Kabakual on the island of New Britain, Captain Pockley, a medical officer in Howse’s unit, became the first Australian officer to be killed in the First World War. Howse returned to Australia on 4 October, intent on securing a commission in the European theatre. This proved difficult at first, however, after much lobbying he secured a supernumerary posting with the Director of Medical Services (DMS), Colonel W D C Williams.

Howse sailed aboard HMAT A3 ‘Orvieto’ on 21 October, bound for Egypt. On 24 December he was promoted to colonel and four days later assumed the position of Assistant Director of Medical Services (ADMS) for the 1st Australian Division. In Egypt he recognised that the arrangements for the evacuation and treatment of the wounded for the forthcoming Gallipoli offensive were wholly inadequate and agitated strongly for better planning, with limited success.

Howse landed on Gallipoli at 7.22 am on 25 April. By the end of the first day of the invasion, medical facilities were swamped by casualties that were three or four times greater than the original estimates. Around midday Howse sought to commandeer every available boat to evacuate the wounded from the beach. Charles Bean wrote that the coordination and manner of the evacuation of the wounded ‘proceeded almost entirely from the vigorous, capable, and ambitious personality of [Howse]’.

Praise for his labours came from Australian, British and New Zealand officers. On 3 June 1915, for his efforts on Anzac beach that first day, he was awarded the Companion of the Order of the Bath (CB). In early July he was evacuated from Gallipoli suffering from acute gastro-enteritis. He returned, at his insistence, on the 22nd.

On 8 August, Howse suffered a slight shoulder wound while supervising at an advanced dressing station during the Battle of Lone Pine. In one 12 hour period he personally treated hundreds of wounded and was later mentioned in the dispatches of General Sir Ian Hamilton, commander of the Allied forces. On 11 September he accepted a temporary role as Deputy Director of Medical Services – ANZAC.

Howse was promoted to temporary surgeon-general and DMS for the AIF overseas medical services on 22 November. He went to Egypt to take up his new position but was recalled to Gallipoli in December to oversee the medical arrangements for the final evacuation from the peninsula.

In June 1916 he gave evidence to the Dardanelles Commission, established to examine the failure of the Gallipoli campaign. In his report he accused the officers’ responsible for the medical planning of ‘criminal negligence’ and warned the Australian authorities against blind faith in any future assurances given by the British Government.

On 1 January 1917, he was appointed Knight Commander of the Most Honourable Order of the Bath (KCB). On the same day his temporary status as surgeon general was ratified and he was promoted to major general. In March he was again mentioned in dispatches when he was ‘brought to the notice of the Secretary of State for War for valuable services rendered in connection with the war.’

Howse continually agitated against the Australian Government’s attempts to lower the standards for new recruits. He returned to Australia in October 1918 to put his case, but the war ended on the day he reached Sydney. Howse returned to Europe on 23 December to assist in the repatriation of troops back to Australia, taking his family with him.

In June 1919, he was made Knight Commander of the Most Distinguished Order of St Michael and St George (KCMG) quickly followed by appointment to Knight of the Grace of the Order of the Hospital of St John of Jerusalem. In November 1919, Howse and his family embarked on the ‘Orvieto’ for their return to Australia, reaching Sydney on 15 December. His appointment with the AIF was terminated on 31 March.

Howse resumed private practice in Orange early in 1920 and the following year was elected Mayor for the second time. On 28 June 1921, Howse left Orange to take up the position of Director General of Army Medical Services (DGMS) in Melbourne. Though he had considerable support, his goal to unite the medical services of the three branches of the military under one leadership failed. Continually frustrated in his efforts, he began to examine the possibilities of a political career.

As early as 1906, Howse had been singled out as a potential candidate for parliament. On 7 November 1922, he resigned his position as DGMS and stood as a Nationalist candidate for the seat of Calare, winning it comfortably.

Howse was presented with his first portfolio as Minister for Defence and Health following a cabinet reshuffle in January 1925. He sought funding for cancer research and developed one of the world's first radium banks. For the next few years he would also be responsible for the repatriation services for Australia’s war veterans.

In 1926 Howse's health began to deteriorate. In England for the Imperial Conference he was struck down with gallstones and required surgery. Returning home in early 1927, he became seriously ill with pneumonia and was hospitalised at Port Said in Egypt. About this time he chose to surrender the defence ministry though he was convinced to take on the Home and Territories portfolio instead. In the general election of October 1929, the Bruce government suffered a landslide defeat in which Howse lost his seat.

Following his electoral loss, Howse took his family for a holiday to England where he again underwent surgery for gallstones. While in hospital it was discovered that he was suffering from pancreatic cancer. He died on September 1930, aged 63 years. He was buried beside his father at Kensal Green Cemetery in London.

Howse’s brother Oswald also served in the First World War as Medical Officer with the 1st Field Artillery Brigade. He returned to Australia early in 1917 suffering from ill-health. He died in 1923.