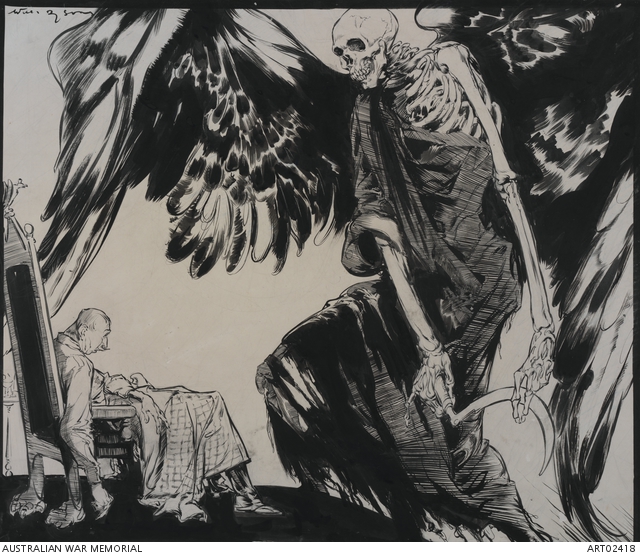 Depicts the dejected figure of Kaiser Wilhelm II slumped in his throne, overshadowed by the huge winged figure of Death, a skeleton wearing a robe and carrying a sickle. This cartoon was published in Dyson's book, 'War Cartoons' (1916) with the following commentary, 'this cartoon...belongs to a period of war sufficiently advanced for all the joy of battle and cocksureness of mission and triumph to have been whelmed...the Kaiser is here a far ghastlier and more tragic figure than bony Death. This is the Kaiser after he has really undergone 'the change of heart' we are fighting to bring about in Germany, the Kaiser who goes about whining "Ich habe es nicht gewollt"...militarism is already conscious of its bankruptcy'. Dyson Anti-German cartoons drawn after the publication of 'Kultur Cartoons' in 1915 were probably done in 1916 for the 'Daily Sketch' journal because before January 1916 and the introduction of conscription Dyson's cartoons concentrated on fighting conscription. From 1915, a number of Dyson's caricatures were published, characterised by his response to Germany's military monarchy. Using a figure loosely based on the Kaiser, Dyson identified the 'common enemy' and attacked it with vigour. When some of his anti-German cartoons were published in 1915, they were accompanied by the following foreword; 'Mr. Dyson...responds to all the fearful pressure of this war in cartoons. He perceives a militaristic monarchy and national pride a threat to the world, to civilisation, and all that he holds dear, and straightaway he sets about to slay it with his pencil...he turns his passionate gift against Berlin." Will Dyson was the first Australian official war artist to visit the front during the First World War, travelling to France in December 1916, remaining there until May 1917, making records of the Australian involvement in the war. He was formally appointed as an official war artist, attached to the AIF, in May 1917, working in France and London throughout the war. His commission was terminated in March 1920.