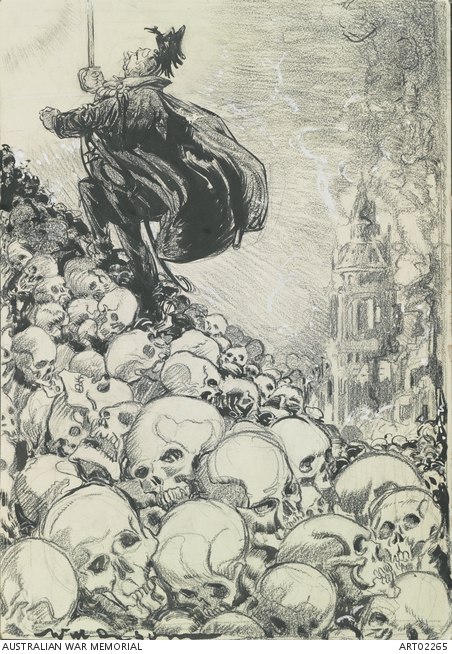 Depicts a caricature of Kaiser Wilhelm II climbing up a huge pile of human skulls, representing war dead, while smoking ruins appear in the background. Dyson's distinctive biting satire aimed at war and later directly at Kaiser Wilhelm meant that his works were seen as epitomising the prevalent anti-German sentiment. He published a series of caricatures in 1915 under the title 'Kultur Cartoon', using a figure loosely based on the Kaiser. This cartoon was published in 'The Daily Sketch', in London in 1916. Will Dyson was the first Australian official war artist to visit the front during the First World War, travelling to France in December 1916, remaining there until May 1917, making records of the Australian involvement in the war. He was formally appointed as an official war artist, attached to the AIF, in May 1917, working in France and London throughout the war. His commission was terminated in March 1920.