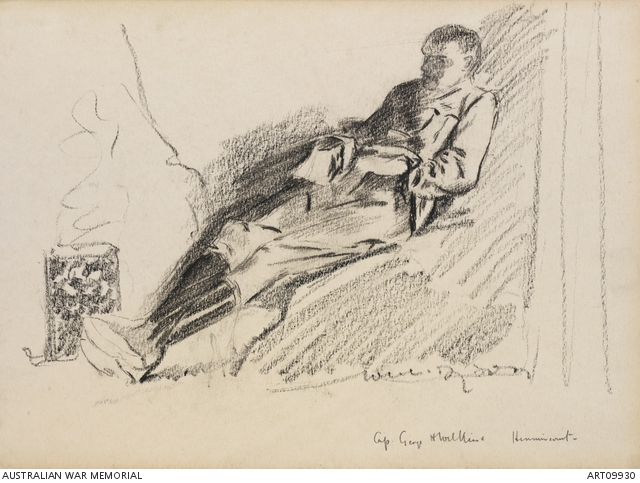 Depicts a full length portrait of Captain George Hubert Wilkins, reclining near a doorway, wearing long boots. Born in South Australia in 1888, Sir George Hubert Wilkins (1888-1958) studied engineering at the Adelaide School of Mines. He soon became interested in photography and cinemagraphics. In 1908 he was hired by the Gaumont Company in London as a cinematographer and by the London 'Daily Chronicle' as a reporter. In 1910 he learned to fly and in 1912 he was sent to film the Balkan War. He was also interested in polar exploration and in 1913 was hired as a photographer for an Arctic expedition. In 1917 he enlisted in the Australian Flying Corp (AFC), which was established in 1913, but was prevented from operational flying because of colour blindness.

During the 1920s he explored the Antarctic by air and in 1929 married the Australian actress Suzanne Bennett. From the 1930s he worked in defence related positions with the US Weather Bureau, the Arctic Institute of North America and with the United States Military until his death in 1958. Will Dyson was the first Australian official war artist to visit the front during the First World War, travelling to France in December 1916, remaining there until May 1917, making records of the Australian involvement in the war. He was formally appointed as an official war artist, attached to the AIF, in May 1917, working in France and London throughout the war. His commission was terminated in March 1920.