Coming out on the Somme 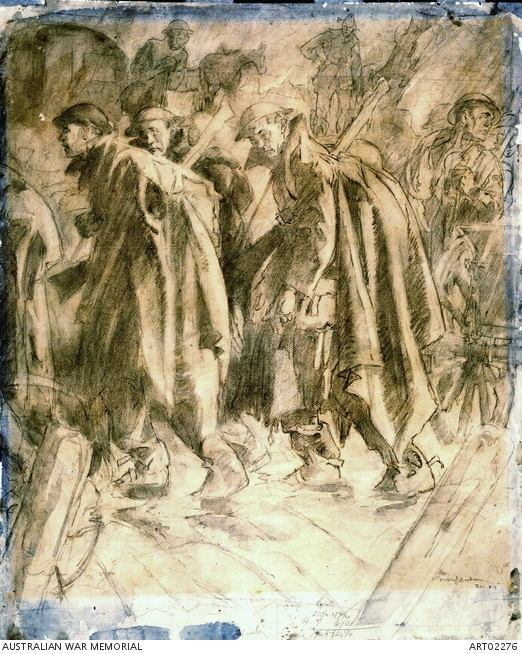 This work is from Dyson's early battlefield observations. It shows exhausted Australian troops, draped in waterproof sheets, plodding through the rain and mud as they reach Montauban, a ruined village now containing temporary army huts and supply dumps several kilometres behind the frontline. Desperately weary, they are stooped, wet and miserable. Their journey has been across ground fought over for the past six months and now consisting of nothing but mud and desolation. Dyson's drawings have become known for the way in which he recorded the soldiers exploits and suffering. He recorded their work, routine, endurance and humour and very rarely captured any heroics. He was determined that his art would not show the war 'except as the filthy business it is'. Will Dyson was the first Australian official war artist to visit the front during the First World War, travelling to France in December 1916, remaining there until May 1917, making records of the Australian involvement in the war. He was formally appointed as an official war artist, attached to the AIF, in May 1917, working in France and London throughout the war. His commission was terminated in March 1920.