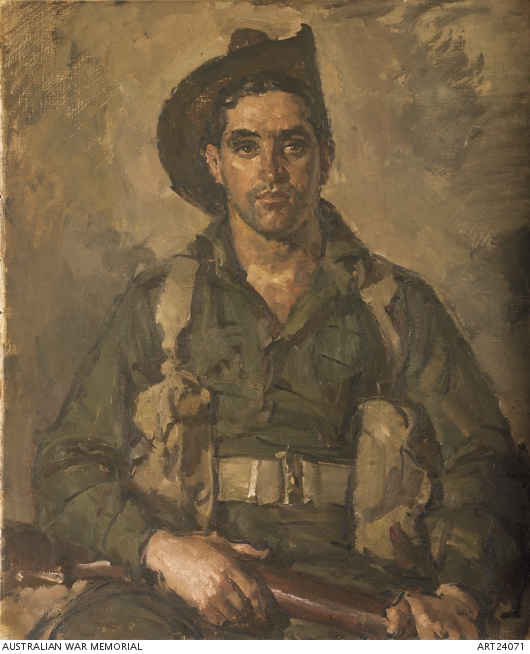 Portrait of a soldier from the 2/48th Australian Infantry Battalion; SX7964 Sergeant Thomas Currie Derrick, VC, DCM, 2/48th Btn AIF who served in the North African campaign. Derrick was awarded the Distinguished Conduct Medal at El Alamein in July 1942 and won the Victoria Cross at Sattelberg, New Guinea, 24 November 1943. He was fighting with his old battalion when he received wounds from which he died on 23 May 1945 at Tarakan, Borneo. Hele was serving as a private in the AIF, when in January 1941 he was commissioned in the field by General Blamey and given the task of depicting the activities of Australians in North Africa. His appointment was made official in October 1941. From June 1943 until the end of the Second World War Hele worked in a number of locations in Northern Australia and New Guinea, holding his commission until 1947. Hele was again commissioned an official war artist , with the rank of Major, during the Korean War. From 1953 he executed a number of portrait and painting commissions for the Australian War Memorial and in 1969 was awarded a CBE for his services to art.