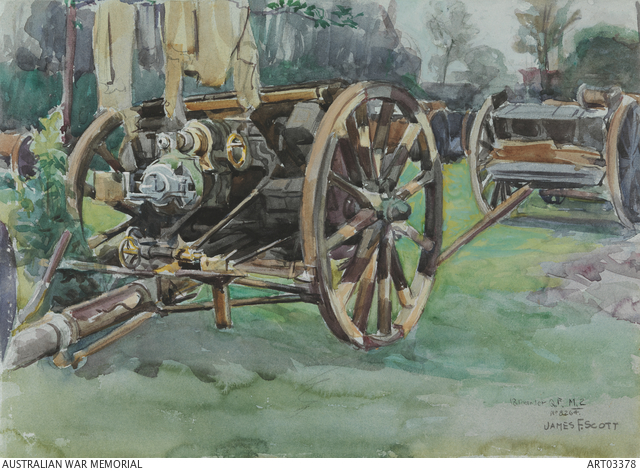 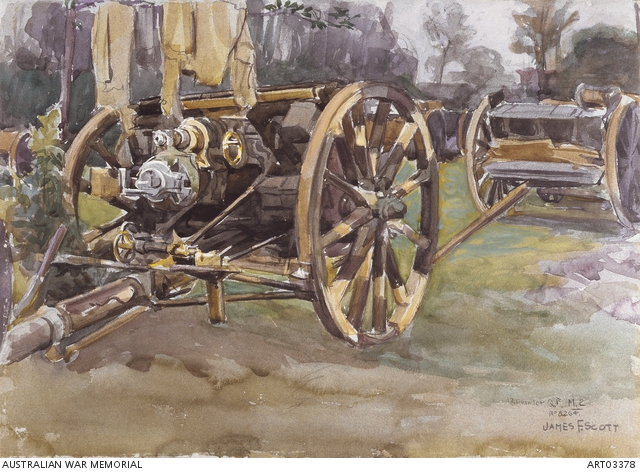 Depicts an 18 pounder quick firing gun, Mark II, with camouflage paint, with a half limber wagon for ammunition, which is also camouflaged, behind the gun. The gun was used by the 1st Australian Imperial Force, Australian Field Artillery. James Fraser Scott's (1877- 1932) official war art is particularly informative, both due to his experiences as a soldier who had seen active service in the First World War, and also because of his physical proximity to key battles. He was selected from the ranks of soldiers in May 1918 to work as an artist with the Australian War Records Section, and was able to quickly interpret and record crucial moments in Australian military history. Scott was a highly trained artist. Following his time at the Dunedin School of Art in New Zealand, he received an extensive art education in Europe. During the 1890s he travelled to Paris, studying at the Academie Julian and subsequently in Munich, Antwerp and Italy. Enlisting in the 50th Battalion, AIF, in May 1916, he served in France; he later sustained injuries to his hand and neck in September 1916 at Zonnebeke. Following this, Scott suffered from poor health, and contemporaries believed the illnesses and injuries he incurred during the war contributed to his death. After he was seconded to work with the Australian War Records Section, Scott initially worked as Officer in Charge of Camouflage attached to the 1st Division AIF. In order to record military life he then accompanied the AIF through numerous engagements in France in 1918 - 1919. Scott was also an accomplished illustrator before the war, and during the conflict produced numerous black and white illustrations about life in the army. In 1918, he contributed pieces to the short-lived publication about the AIF in Europe, 'The Dinkum Australian'. Following armistice, Scott worked in a studio at St John's Wood with fellow Australian War Records artists Will Longstaff, Frank Crozier and George Benson. After his commission ended in 1920, Scott subsisted on a small war pension in London, and struggled to make a living as an artist.