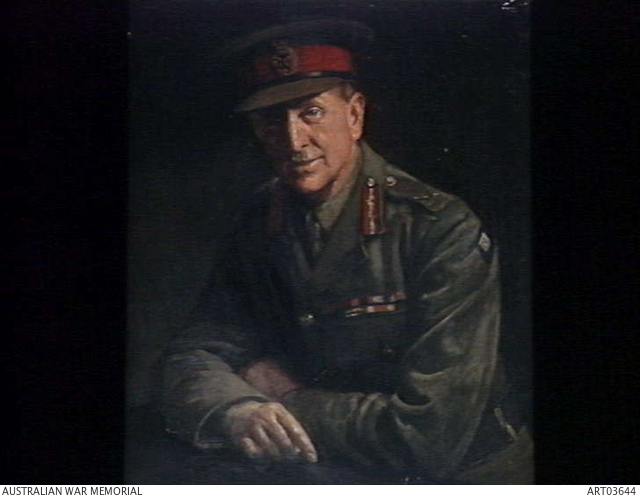 Depicts a portrait of Brigadier General Cecil Henry Foott, CB, CMG, Deputy Director General of Repatriation and Demobilisation AIF; Western Front. Cecil Henry Foott (1876-1942), regular army officer, was born on 16 January 1876 at Bourke, New South Wales. After his father's death in 1884 he was educated at Toowoomba and Brisbane Grammar schools and later qualified as a mechanical engineer. Foott was commissioned second lieutenant in the Queensland Militia Garrison Artillery in March 1895 but joined the Queensland Permanent Artillery in September 1896 as a lieutenant. In 1902 Foott transferred to the Royal Australian Engineers but remained in Queensland as staff officer, engineer services. He went to England for technical training in 1908 and on returning was staff officer and commander, R.A.E., in Victoria in 1909-10. Promoted major in August 1909, his next posting was to Army Headquarters, Melbourne, where in 1910-11 he was director of works and in 1911-12 director of engineers. In January 1915, in the rank of major, Foott joined Major General (Sir) William Bridges's 1st Division, Australian Imperial Force, as deputy adjutant and quartermaster generalFoott was appointed C.M.G. and awarded the Serbian Order of the White Eagle (4th class) in 1916He was transferred to A.I.F. depots in Britain as deputy adjutant and quartermaster general in July 1917, and in March 1918 was posted to Lieutenant-General Sir William Birdwood's Australian Corps in France as chief engineer. Foott returned to Australia in November 1919 after an eight-year absence and his A.I.F. appointment ended in February 1920. In October 1920, as a colonel and honorary brigadier general, he joined the newly formed Australian Staff Corps, then in 1922-25 served as a colonel in various posts at Army Headquarters in the quartermaster general's branch. In 1926 he was posted to Queensland where he was given, concurrently and temporarily, for the next four years three command appointments including that of base commandant, 1st Military District. It was not until February 1936 that he was officially placed on the retired list as an honorary brigadier general. Charles Bean described him as 'a man of educated tastes and fine intellect' and 'an officer of great ability' who became 'one of the notable figures in the Australian Imperial Force'.
George Coates (1869-1930) studied painting under L. Bernard Hall between 1895-96 acquiring both respect for the painter's craft and the approach of the Munich School. He won a travelling scholarship in 1896 and went to London next year before moving to Paris, where he worked at the Académie Julian and studied under Jean Paul Laurens. In Paris Coates renewed an acquaintance with a fellow art student, Dora Meeson (1869-1955) who later became his wife. Coates and Meeson established themselves in Chelsea, London where they became members of an extensive circle of Australian expatriate artists. Coates established himself as one of London's leading portrait painters, where he lived until returning to Australia in 1921, and his realism and representational style emphasized a harmonious range of low tones, with a detailed and painstaking approach.