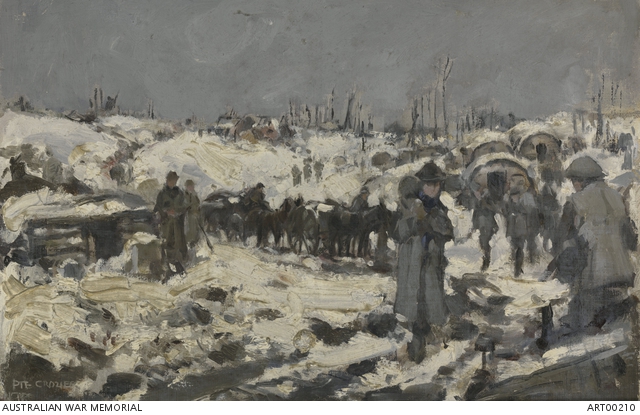 Depicts a landscape covered in a heavy snow. Soldiers are weighed down by heavy overcoats and horses are carted up as if in preparation for moving out. In the middle distance can be seen some shelters and along the horizon line are war damaged buildings and the remains of shell-shocked trees.
Frank Rossitor Crozier was a painter and illustrator. Born in Maryborough, Victoria, he studied at the National Gallery School from 1905-1907, winning prizes for landscape and drawing. He worked initially as a decorator and clerk before enlisting in the 22nd battalion, AIF in March 1915. He served in Egypt, at Gallipoli, where he contributed to 'The ANZAC Book' , and in France where he was attached to the 1st Anzac Corp Topographical Section in 1917. In France he served under Brigadier-General Gellibrand who asked Crozier to make sketches of the Battle of Pozieres. He was appointed official war artist in September 1918. Like fellow official war artist Will Dyson, Crozier often painted the human dimension of warfare. Following the First World War he became the first combatant AIF artist to be appointed to War Records Section in London. Returning to Australian in 1919 his commission was terminated the following year. He undertook further studies in England and the United States from 1923-24 and exhibited with the Royal Academy in London. In 1936 he was appointed an artist to the War Memorial for a period of six months and during the Second World War worked in a munitions factory in Victoria. He died in Victoria in 1948.