Dug-outs on road near Glisy 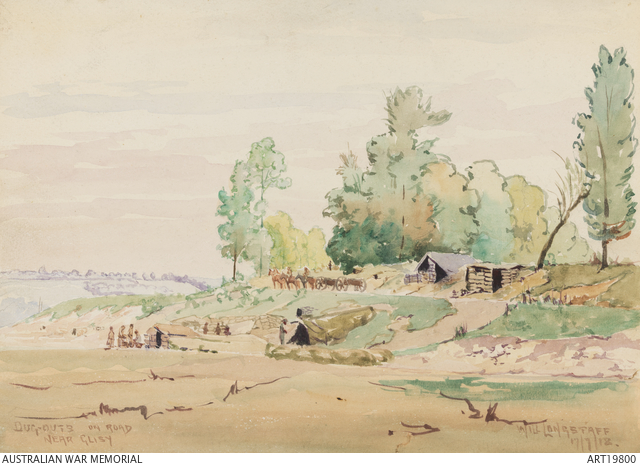 Watercolour sketch depicting the dug-outs outside the village of Glisy. Will Longstaff was born in Ballarat, Victoria in 1879. From 1900 to 1901, he served with the South African Light Horse in the Boer War. Following his return to Victoria, he taught art privately with Leslie Wilkie at Eltham. He enlisted with the Remounts in October 1915 and served in the Middle East and France before being invalided to England in October 1917. While serving in Egypt, he made pictorial records of the ANZAC Mounted Division and the Desert Column. He then served in England with the B Sub-Depot, Westham. In 1918, he was trained in camouflage work in London with Frank Crozier, J. S. MacDonald and James Scott, and he was subsequently appointed as an Official War Artist working as officer in charge of camouflage for the 2nd Division AIF in France.